One of the most consistent duos in the UK over the last few years has been Waifs & Strays. The Bristol act always deliver great house music, whether it’s bumping Chicago style jams on Madtech or deep and dark cuts on labels such as Resonance. Sadly, Waifs & Strays recently became a solo act after one half, Rich Beanland, started to have problems with his ears. The good news is that Amos Nelson, the remaining member, is keeping the Waifs & Strays name very much alive and he’s doing a sterling job we must say…

Instead of the standard ‘how did you get into music’ type questions, I think it’s best to just go straight into the more pertinent topics surrounding dance music at the moment. So yeah, what are your thoughts on the current path that house music is heading down at the moment?
Dance music has been moving more into the main stream for a few years (look at EDM!) and house has followed this trend. This isn’t a bad thing necessarily as it will get more and more people into the music, and the more underground scene couldn’t be stronger at the moment. Its also nice to see more and more DJs crossing genres and playing sets of deep house, house, garage, more bass oriented stuff and techno all in one set. 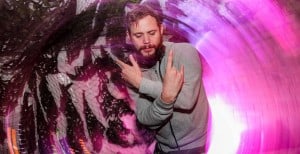 So you’re from Bristol. The number of artists we interview from Bristol is crazily high. Why do you think Bristol produces so much talent?
I think Bristol has always had a really strong musical culture – a really strong musical heritage.
Roni Size, Massive Attack and Portishead are examples of that. It kind of went into a little decline, but in the last eight years artists have stepped up their game a bit. There were already plenty people making good music, but suddenly there was a bit more of a platform.
Then you have things like Love Saves the Day, Motion, all the events that Rag has done, they’ve had a massive influence in bringing house music to Bristol. On top of that Bristol is a very bohemian city, a very artistic city. Also, you drive around certain areas and the walls are covered with really amazing graffiti.
Bristol has always had that creative energy where ever you go. You’re constantly getting inspired by the bits of art or music other people have done. It’s not the biggest of cities. In somewhere like London there is so much going on all the time. If you’re in Bristol, everything is quite concentrated, so everyone bounces off each other. The creativity just seeps in to you because you are surrounded by it all the time. It’s a really great place to live – really laid back and interesting – without being a massive city. There is no one reason why it produces such talent, it’s just a really nice positive place to live and that comes through in what we’re doing.

Who inspired that love for music?
Originally, old house DJs really. Sounds a bit cliché, but Frankie Knuckles, obviously. That’s what I was in to, that American, New York and Chicago sound. Kerri Chandler, people like that. I was always a house music person. And then more recently, the people who I’ve been associated with. Eats Everything is a good friend of mine, other Bristol people. You go places and hear your friends play and think, ‘Wow! That’s really inspiring.’

How do you feel about the term house music at the moment?
It’s a bit of a tough one. I don’t really know if you can define house music. As a song goes, it is a spiritual thing, it’s a body thing. I think that house music is a very broad genre of music. It’s like saying this is rock music, and rock music can be in all its different guises.
I think what is a little strange is people going into the sub-genres of house music, deep house is a prime example, and calling everything deep house or something. It’s not. It’s garage or it’s normal house music.
In the end, though, good music is good music regardless of labels.

How has becoming a solo artist changed how you make music?
It’s changed it a bit. Rich [the other half of Waifs & Strays was obviously a huge influence in what we did and it did change things. It’s given me a bit more creative freedom but I miss his influence a lot. It’s a double-edged sword in that sense. We’re still friends, there is no bad blood there at all.

Does that apply to how you play live as well?
Yeah, that’s changed a lot. I’ve gone from playing with somebody to playing on my own. I quite like playing back-to-back, some DJs don’t, but I quite enjoy it. It’s nice to have total control. You know the direction you are going in your set and you don’t have someone else influencing that.
Not having Rich there definitely has had more of an influence on the DJing. It’s less of a collaborative thing now and more just doing whatever I want.

Where did you get your first big break and how did that feel?
The first big break came from when Matt Tolfrey signed up ‘Yeah Yeah’. He played it at Old Miami in Detroit and the place went nuts. He sent me a video of the reaction and that had a huge amount of views on You Tube and things went from there. It was an amazing feeling to see a reaction like that to a tune you have made. When Pete Tong made it Essential New Tune it was one of the best days of my life.

What has been the highest point of your career so far?

Sticking with live performances, how important is the visual element of live performances?
I think that it’s incredibly important. I’m probably not the most visual DJ out there. Especially with the bigger clubs and events and festivals, things like that.
Having a stage presence is very important. Getting to the top level is very difficult if you don’t have a strong, charismatic presence on stage. It doesn’t necessarily mean that you have to be doing something all the time. But if you have a strong presence it is definitely a positive and will help move your career forward. Obviously, if people like watching you, then they’re going to want to come and see you.

Finally, can you finish this sentence for us: Without music my life would be…
Grey. Music adds the colour to life.