Electronic duo DVBBS (pronounced “dubs”) comprises brothers Christopher and Alex van den Hoef from Ontario, Canada. Initially, the duo made reggae and punk before focusing mainly on electronic music. In the early stages, the siblings joined forces with DJ Martin Sinotte, calling themselves Dubbs. In 2010, the group released the Generation Party EP and went on to tour with the likes ofSteve Aoki and LMFAO. Sinotte left the group in 2012, prompting the brothers to change their name slightly from Dubbs to DVBBS. Under the new name, they released the EPInitio, fusing a variety of influences in house, electro, reggae, and dub. Their first major success came in 2013 with the track “Tsunami,” a collaboration with DJ and producer Borgeous, released on Sander van Doorn’s label Doorn Records.

The single went to the top of the Dutch charts and was also a major success in Germany, Austria, and Switzerland, climbing into the Top 20. A remix that featured Tinie Tempah, titled “Tsunami (Jump),” went to number one in the U.K. As they issued additional singles across 2014 and 2015 — including “Gold Skies,” a collaboration with van Doorn and Martin Garrix – they continued to raise their profile on the global festival circuit and held a residency at popular dance music venue Hakkasan in Las Vegas. 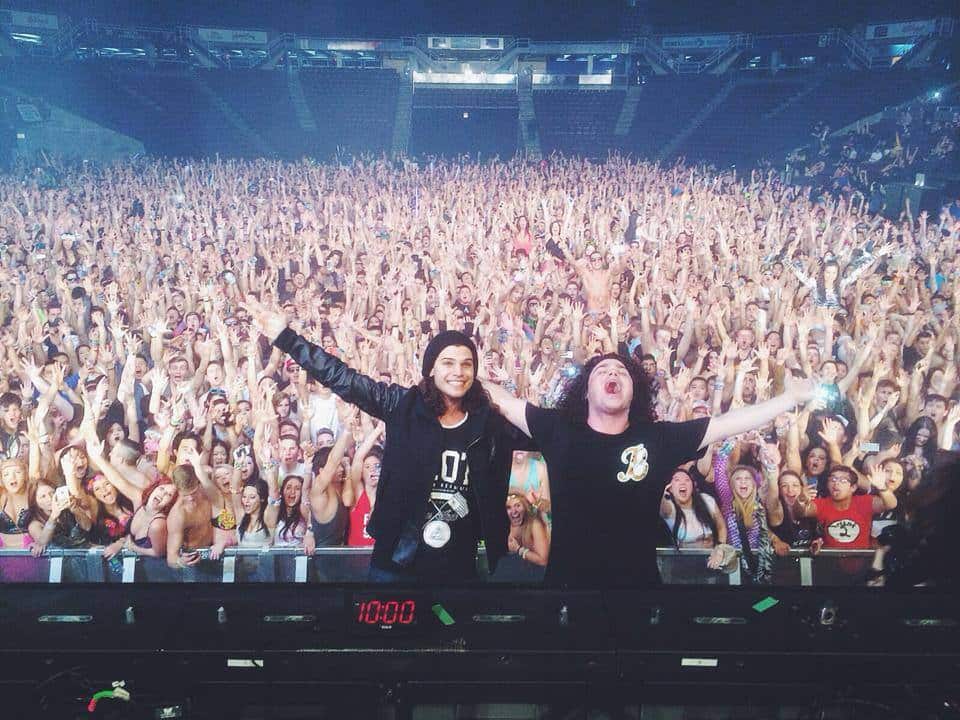 You have been producing rock-music some time ago – as your hairstyles might still suggest (sorry! ;-)). What was the trigger to switch to EDM?
There wasn’t really a certain thing that triggered us per se, it’s just that the scene has been growing at such an explosive rate it was hard to go unnoticed. We both did go to raves before we started to dj so we weren’t complete strangers to the sound. So after a while we decided to take a shot at it and obviously that turned out to be a very good decision. Oh and we’ll keep the haircuts for sure!

On your gigs you sometimes jump around as you were totally crazy. You do not only play your music, you also live it and I guess that also reaches your crowd. Where do you take that energy from?
Like you said earlier, we come from a rock background and as you’ll probably know those shows tend to be quite energetic as well. It’s a really cool thing for us to be able to use those rock aspects like grabbing the mic and jumping around at our shows we play today. We’ve been producing more and more tracks that have vocals on them so we’ll be doing it more and more too.

Do you, as you are brothers, have a certain role allocation when you’re on the road or in the studio?
Yeah we sort of know what our strengths are. Alex is mostly the guy who comes up with the melodies and then Chris is really good with the technical and rythmical stuff so we do work very well together in the studio. On tour it’s just one amazing rollercoaster of fun and we’re both good behind the decks as well as on the mic so while we’re performing it doesn’t really matter who does what.

How long do you see yourselves DJ’ing and producing for?
We’ve always been punk ass kids, but we’re maturing every single day. Before when we used to tour we would travel and just go absolutely crazy with our friends, but now it’s different. We’ve got more eyes on us now and we don’t want to fuck anything up. A simple slip up could ruin everything we’ve worked for. So we’re trying our best to do the right thing and keep this going for as long as we can.

What has been your guiding principle for success?
We try to be very involved with our fans, we make our productions versatile and diverse and we just give it our all when we’re on stage!

What are your personal strengths as musicians, and how does this affect the way you allocate roles inside the studio?
We both have strong points and weaknesses and we’re aware of them so we basically just complement each other as much as possible. Like for example, Chris is super good with all the rhythmic and technical stuff and Alex is really good with coming up with melodies and such.

Let’s talk about your new label, how’s that been going? Why’d you decide to start one?
Our main thought behind the label was to not push it in anyone’s face. It’s a label and it’s always going to have dope records coming out because the people we fuck with are dope. It’s all sorts of genres, it’s going to have everything and be really diverse. The label has also been planned for 4 or 5 years. We’ve had the name KANARY since we first started. That’s our corporation’s name. We always wanted to start a label.
Being independent and having a few key partners, that are also basically independent, kind of like boutique, but still get things, that’s the way wanted to go. We still have full creative control but we’ve got some help in funding and getting our stuff to a broader audience.