Before the music, there was Future Soup. This was the first creation by Autograf, an eight-foot 500-pound sculpture. It’s an obsession with the Future and the limitless possibilities it holds. What started out as a desire to “make art,” turned into a curiosity to make music. This curiosity has set the Hype Machine charts ablaze hitting either the #1 or #2 spot five times for Autograf’s debut remix..

How did Autograf come together?
We’ve known each other for a while working on our own projects in Chicago and had wanted to do a project together for a long time. We wanted to do something really different, putting on focus on art verses music because the other guys have a background in art. Jake went to Art School and Mikul was a street artist and graphic designer so we came together to do something cool and fun creatively. We started the project out not by making a song, but by throwing an even where we created a bunch of pop art pieces. All original pieces like a 8 foot soup can, Autograf Brillo boxes and things like that. The original focus was visual art because that’s what kind of gets lost in music, then we started putting out music and that caught on really fast and took over. At some point we want to bring the focus back to that

Who or what are some of your inspirations?
Felix da Housecat was a big inspiration to me personally in the early 2000s during the whole electro clash phase. I feel Felix da Housecat got me into electronic music, but it wasn’t until it got mixed with the Indie Rock scene, Indie Dance I guess is what they called it back then is when I wanted to DJ and preform dance music. The other guys have different influences than me, Mikul was really into Heavy Metal and Jake is kind of an oddball, I’m not to sure about him. 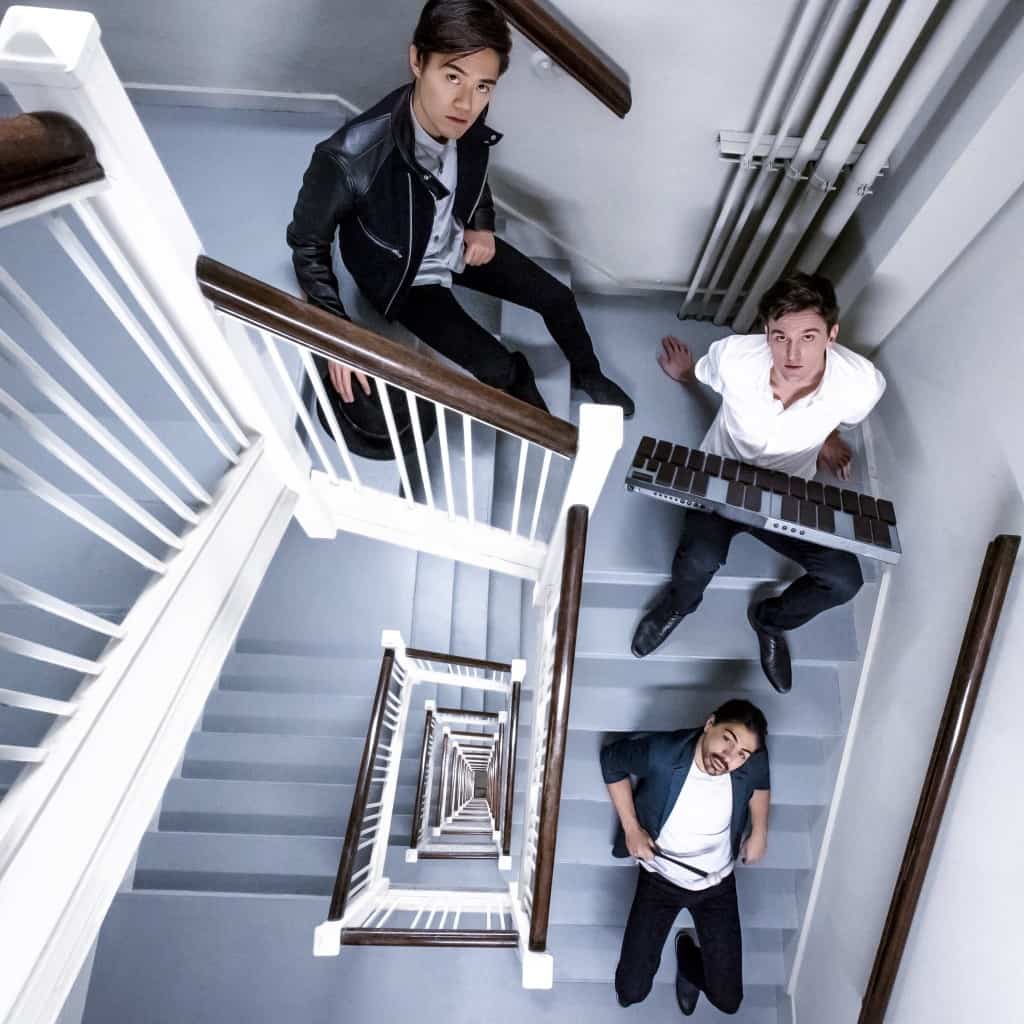 You guys seem to be enamored with the future. What do you think the future holds for dance music?
Creating a live experience. Having artists being able to play their tracks back live and even remix their own tracks on the spot and finding a way to take something created on a computer and recreating it for an audience in real time. These days most touring DJs are producers. So you go see them because you like the tracks they created. It’s important to have the ability to play your track back in a different way rather then just hitting play on a CDJ.

Let’s talk about your live performances and what goes into each show that you guys do. What kind of vibe do you guys strive to bring to the DJ booth during your shows?
It’s almost like our playground up there. We’ve got a midi marimba, it’s basically a giant piano that you can play with drum sticks. On the other side, we have a traditional African drum. Our sounds are kinda tropical house. People just like to label things. To us, we kinda make a joke out of all the genre naming. Realistically its about the music we’re playing. As far as the kind of vibe we go for, it really depends on the festival. We played a beach festival on the Gulf of Mexico, so obviously for that we were feeling more of a summer, beachy vibe. But when we play in a dark, underground spot we definitely wanna go deeper with it.

What’s your live setup?
We were thinking about what to do with live shows. Jake grew up playing several instruments: drums, piano, guitar… We were thinking about piano but everyone is playing piano live.
Marimba was more original and Jake played it in a band in high school. We started that like 9 months ago. We hope to inspire the whole world to start playing the marimba. Some artists are actually interested, like Felix Jaehn, who wants to try to play the marimba after seeing our live videos. We also do the hand drums and djembé.

On the live performance aspect, you guys have a combination of technology-based performance as well as playing traditional instruments in a hybrid fashion. What are your overall thoughts on technology’s role in music performance – as it seems to have become a controversial thing?
I think we are really for it, I mean we have our own midi instruments that we are building. We are trying to push what we can do it with it in a live setting and see where it can take us as use it. However we also focus utilizing real instruments, which give us a bit of a different approach. So we may be playing ‘electronic’ songs, but we are very much incorporating live instruments as well.

Do you feel like the incorporation of instruments into a DJ set allow for more creativity on stage?
No, because I think DJs are creative in their own ways. So it isn’t more creative one way or the other. In my mind, that is it’s own instrument. I have been to shows where DJs couldn’t read sheet music or show you middle C on a piano, but they will blow your mind in a live show, just through how they transition, how they move from song to song. That definitely is it’s own instrument in my mind. However, knowing all of these old school instruments, like what we used to have before even speakers were around, I think it is important, and it is something that is not present in dance music now days. There might have been more of it in the 90s, you know like trance guys playing stringed instruments, for example. But I think it is cool, and we have the technology to utilize that sort of stuff into our sets these days, so we should bring it back. We are not just up there twisting knobs. We are performing. We are doing all of these things right in front of you.

You’ve done remixes for Marvin Gay like you mentioned, Alesso, Odesza, Dirty South, and Lorde, do you guys have a certain approach when it comes to remixes or is it different every time?
It’s all different, you get inspiration from things differently. For example, I was rolling around California one day and 50 Cent’s “Magic Stick” came on and I was just like “This would be really cool with a mid-tempo, Deep House beat. Sometimes you get asked to do a remix, you receive all the stems and at that point you have to figure out what you what to do with it. Sometimes you here beats and melodies in your head and sometime you don’t, then you have to work with the tools given to you. Every single song have been different.

What’s a studio session like for you guys? Are you all on the same page or all over the place?
I’d say Jake is the creative one and we’ll either bring ideas to him or he’ll just show us something he’s made. I think a lot of the time we work really independently, but we value each others input. I do think in music it is hard to have a democratic , you need to have someone to take the reigns.

#LeaveYourAutograf is your official affirmation in the music scene. How would you say you guys are leaving your mark on the world?
My sister has a friend who has been battling cancer, and after taking care of her for quite some time it’s really taken a toll financially. She has taken it upon herself to throw three fundraising events in Washington D.C. at major music halls including Flash and U Street Music Hall. So basically we want to go perform an event for them, where all the proceeds would go towards the individual. I think that ties into the whole #LeaveYourAutograf thing. We want to encourage people to make a difference the world and leave their mark in any way, shape, or form. That could be doing a good deed for people or something as simple as sharing a good experience with friends and listening to music. 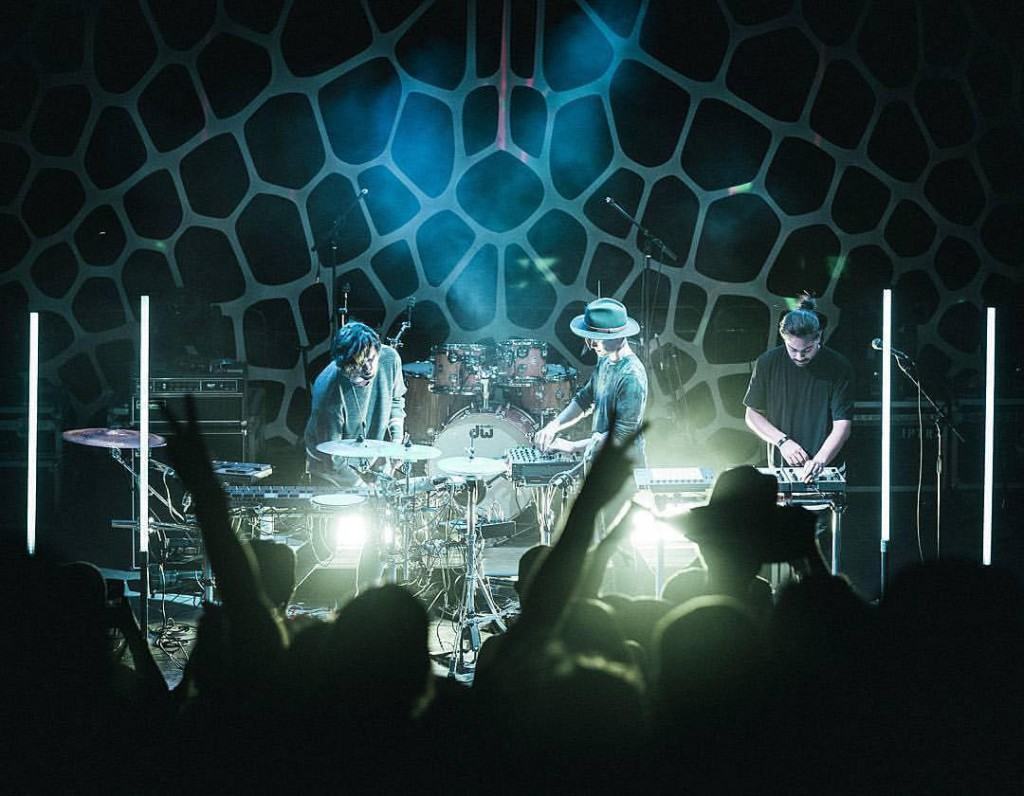 What would you say has been the most surreal moment of your career so far?
It happened early on at a show in Chicago that we were headlining. We were pretty new at this time, we showed up and found out it was completely sold out. We went out to preform and the crowd was chanting our name and at the moment we were just like “Holy shit, this is it…..we’re living our dream!”.