In an industry as experimental and ever changing as dance music production, to remain an indispensable piece of the action can prove to be a challenging feat. Only a handful of acts have been able to compete in this position, especially within trance music, and Gareth Emery remains to this day one of the most iconic trance and progressive house producers to successfully migrate out of the UK and retain global recognition for his work.

Beginning his journey in 2002, Gareth Emery was instantly recognised and supported by some of the biggest influences in dance following his debut remix of The Shrinks ‘Nervous Breakdown’ and the career launching track GTR ‘Mistral’ – Judge Jules, Paul Van Dyke and Armin Van Buuren to name a few.

You’re considered “anti-genre” and mostly play trance and house; how has that helped, hampered or inspired your musical journey?
Trance is the world I’m obviously the most from and that’s what most people know me from but I like everything. I think it has equally helped and hindered me. A lot of the people who are into me the most like my sets because you can hear a bit of everything. It won’t be one-dimensional, you will hear a lot of different styles in there but there are also people from the world of trance that go, “We just wish you’d play pure fucking trance.” I feel like you lose on one hand and you win with the other hand. All I can do is all I want to do; if I look back and say I made the decision that I felt was the right one and I played the music I wanted to play. I want to be artistically honest as well and I think that’s why even though playing one style of trance would make me way more money, I still wouldn’t do it because it doesn’t feel right. You have to feel happy with what you’re doing and you’ve got to be able to look back at what you’ve done in your life and know that you did what you wanted to do. 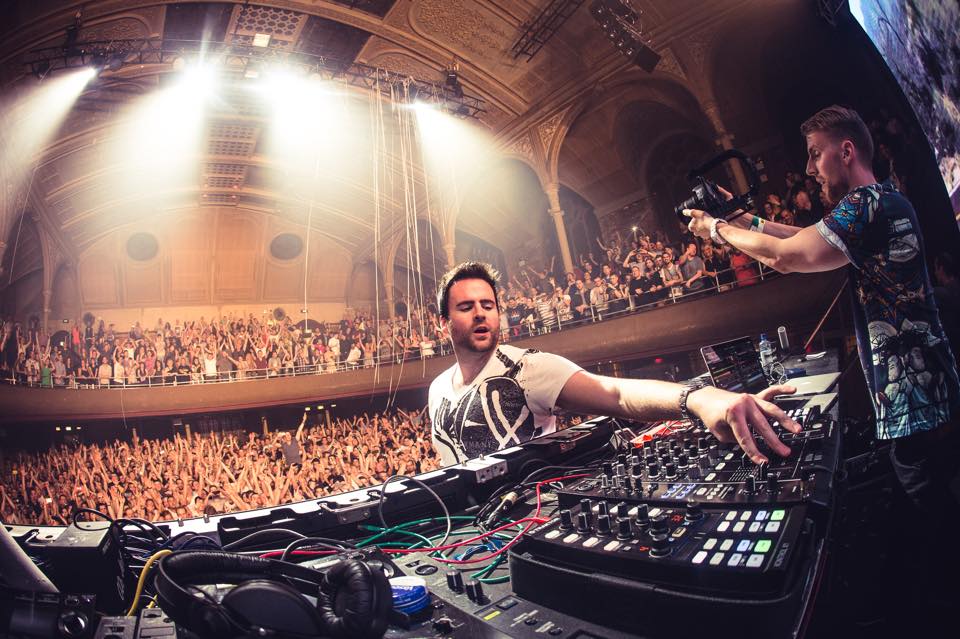 The title of your second album “Drive” was inspired by your cross-country tour. What inspired the title of your upcoming album?
Positivity and changes in my life. There was a period, maybe like 2 years ago, where I could feel myself becoming this like really stereotypical miserable DJ. It’s kind of amazing that people generally don’t know that so many artists are just miserable. We are traveling around, playing festivals, we have the most amazing jobs and we’re so fucking lucky, yet there are so many people who are always so pissed off that they’re tired, their fucking drink wasn’t chilled to like 35 degrees. Their record only got #2 on Beatport rather than #1 or whatever. I could feel myself becoming one of these people and all of a sudden one day I had an awakening and was like “You’re so fucking fortunate to be living this life. You’re getting to travel the world, you get to make and play music for a living, what have you got to be miserable about?” I started embracing gratitude in my own life and waking up each day going, “Wow I’m pretty fucking lucky to be doing this” and realizing that it didn’t matter if I didn’t get a festival slot or whatever. The album is basically embracing positivity and gratitude in life. It was originally called “Reasons to Live” and I thought it sounded cooler with 100.

You showcase multiple different styles on “100 Reasons to Live.” For example, there’s a bit of deep house/ambient sound on ‘Cloudline,’ which is reminiscent of the EFL Deep episode. Can you tell me a bit about that track?
I was producing the track when I was on the Electric for Life all night tour, so we did all-night sets, like 6 or 7 hours. During those shows I was getting to play like 2 hours of deep stuff every night, and I was so inspired by it that I was like, “I want to fucking write a track of my own that fits this part of the set.” So I wrote ‘Cloudline’ inspired by that stuff. It’s kind of crazy , so many of my friends that have heard the album in advance, love that record. It’s just a little groover, like you’re driving in the car and playing that in the background.
You have a few personal tracks on “100 Reasons to Live,” but overall, what’s your favorite song on the album?
“Sansa” is really personal to me. It was a follow-up to Long Way Home, which was an incredibly personal track for me on Drive, so that’s kind of where “Sansa” came from. That’s probably the most personal one, I think. When you name a track after your daughter, it’s going to be a track that emotionally touches you. There are so many of the records I am proud of, like the new one with Christina Novelli, “Save Me,” I’m really stoked about that one, and the intro track. Some previous albums I kind of felt like we had one or two good singles and then, not filler, but I could say very clearly which ones my favorites were. This one, I’m really kind of liking and am happy with everything on it.
While waiting for the release of 100 Reasons to Live, check out the beautiful acoustic version of Save Me featuring Christina Novelli:

Electric for Life is very broad and doesn’t only focus on one genre, for example the podcasts focus on tracks you think are good that week.
Yea and that’s why it will stylistically change each week. Some people have said, “How do you decide what style to feature on each show?” It’s whatever is good. Sometimes there’s a shit load of good trance releases that week and all my favorite trance guys are giving me records so it’s going to be a trance EFL episode. Other times, the trance kind of sucks that week but I get a load of great fucking deep stuff. So basically, I listen to all the music and whatever are the 15 best new track that week, that’s what goes into the show.

What does Electric for Life mean to you?
It’s just an embracing of good music of any musical style and it’s also about fun. I potentially took myself a little too seriously in the past. Like whenever I did a flier or a press shot, it was me doing the typical DJ pose on the cover and Roxanne was like, “It looks a little bit fucking serious. You don’t really have the ability to laugh at yourself.” So she was like, let’s do something a bit more fun so we came up with Electric for Life. It’s like fucking bright colors, the parties are fun and it’s been so much fun for me to get back into a brand that’s a little bit more fun focused. It’s amazing to see people connect with it. The name came about at one of our meetings; I was saying that people don’t get into electronic music for 3 years and go into other stuff. Even when I know people who were go out to clubs 20 years ago, they might not be going out that often, but around their house they still listen to electronic music. Once you’re in it, you’re in it you’re a lifer.

With the likes of Above and Beyond and Armin van Buuren also hosting similar trademark radio shows, (Group Therapy and A State of Trance), what makes your show stand out?
Electric For Life isn’t really genre specific, which is a big difference. Yes, you hear trance on there, but also deep house, progressive, chillout. Basically anything that’s good and I like, it will get played, and that then filters through to the live shows because when I’m playing for 5-6 hours. I get the chance to be as varied in a club as I can be on the radio.
But I don’t like to compare with other shows. They’re all good in their own way, but I will say A State Of Trance is the original innovator. You see many shows celebrating Episode 100 or 200 or whatever but we have to remember A State Of Trance did that before any of them and everyone else adapted that format. Armin has been an amazing innovator in that sense and continues to be to this day.

There has always been a huge trance following in the UK, but with the likes of Faithless and Above & Beyond just finishing European tours, do you think trance could make its way back into the commercial market? Or is the genre destined to thrive underground?
I think worldwide it’s in an interesting place because you’re not really seeing trance records become radio hits, yet the events are bringing in more people than ever. In the UK you see Above & Beyond doing huge venues. Here in the US we just did The Shrine in Los Angeles which is 5,000 people. And personally I think that’s a healthy place to be.
More people than ever are coming to the shows but we’re not relying on the whims of the radio industry to make that happen. I remember the original trance explosion back in 1998/1999 which was very much based on commercial radio support, and when the radio stations decided they didn’t want to play trance anymore, that really hit the scene badly. We’ve now got an amazing scene that doesn’t rely on anyone else.

Is there a particular artist or group that have stood out and made an impression on you over the past 12 months?
Ah man, there’s been so many. It’s been a great year for music. On a deeper tip I love the music Louis Vivet have been making. Alex Sonata and Luke Bond have been incredible on a house tip, and it’s amazing that Loco Dice finally released his USS album. Been waiting for another album from him for years.

Lastly, give us a DJ secrets.
If I never had to wake up the next morning, a pint of red wine would be my preferred thing to have before bed. But honestly I’m so boring these days. I used to drink every show when I first started. I’m British, we like to drink. At that time it was just like twenty shows a year cause I wasn’t playing much, then it became like 50, then it became like 100. And I was like, “F–k it, I’m drinking a hundred times a year for work, plus how many times I go out socially, this is far too much drinking.” So I kind of learned to break the connection in my head between DJing and drinking and now unless I’ve got friends coming out, I’m stone cold sober. I play a better set and I have more fun as well. My rider is like coconut water, no alcohol beers. Promoters laugh at me.