Discovery of talented duo Dimitri Vegas and Like Mike are another duo formed by Steve and Ruben under the stage name of Wolfpack. Early in on their career they have achieved notable success with their debut release on ‘Smash The House’, ‘Rising Moon’, but also a remix for none other than Billboard heavyweight and US chart royalty Timbaland, Missy Elliott and Ginuwine’s as they relicked their global smash hit ‘Get Involved!’

This talented act, who hail from Dimitri and Mike’s hometown of Willebroek, rapidly becoming the epicentre of rising musical talent in Belgium, have been described by the brothers as ‘diamonds in the rough’ and ‘one of the most promising talents around’. “When we caught them live they just blew us away,” said Dimitri Vegas, “but then when we listened to their productions we were like, wow! We knew if we didn’t sign them up to Smash The House there and then, someone else would and we’d be left kicking ourselves for not being quick enough.” Where does the name come from?
Steve: Actually came from the film ‘Hangover’. Those guys were kind of like us. Always doing shit together and taking care of each other.

Together you from Wolfpack how did you two meet and what lead to the forming of Wolfpack?
We met at a very young age, when we were still going to school. Our passion has always been music and that’s how we ended up working together as Wolfpack.

People are saying, you are the “proteges” of Dimitri Vegas & Like Mike.. How was born the fabulous story between you and them?
We know Dimitri and Mike since we were 14 years old as we lived in the same town. Three years ago we became second on a dj-contest which gave us a spot on Tomorrowland. Dimitri and Mike noticed our set and gave us the awesome opportunity to sign us to “Smash the House”.

How do you see EDM in Belgium in the upcoming next few years? A few years ago, Belgium was the pioneer of Dance Music, a reference into the dance world. Is the country ready to bring it to the next level?
EDM is definitely rising everywhere in the world !No doubt we have the right ingredients 😉

Do you remember the first gig you played at, what was the experience like, did you love it or hate it?
Our very first gig was when we where 15 years old, hahahaha , our first mentionable gig was Tomorrowland 2011 and was one of the best days of our lives

What are your other interests besides music?
Steve: I just don’t know what to answer.
Ruben: Yea, we have not much time. Most of the time I am in front of my computer. When not in front of computer, I have to spend time with my girlfriend. Travelling and carrying suitcases- takes a lot of time to make music. Make sure you have lot of music to play in your sets and making contact with people.

What according to you guys is essential for a crazy night in a club?
Steve: Good crowd and good vibe in the club. DJ is important but if the crowd is not good, it could be the best DJ in the world and you would not have a good time.
Ruben: Good sound is important. But we hardly go out to party. We just always travelling and working and partying at the same time. When we are home we just sleep and spend time with our girlfriends. 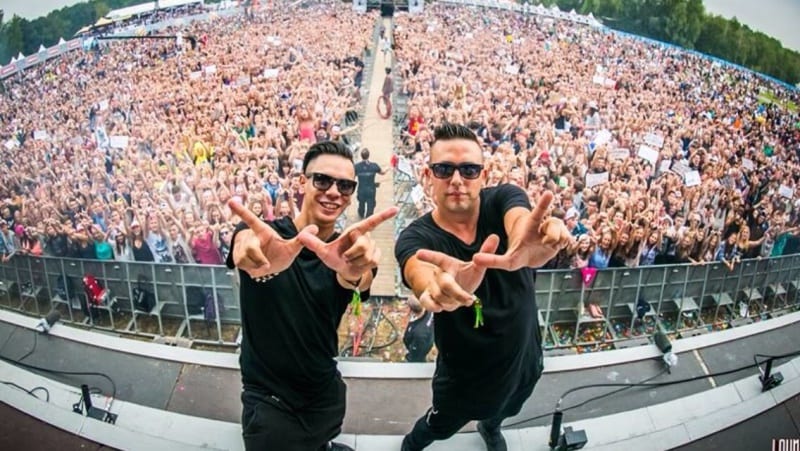 Which DJ would you like to swap places for one day if you could?
Ruben : David Guetta
Steve : Eric Morillo “would love having a privat jet for a day”

What piece of equipment could you not live without (not necessarily DJ equipment)?
Ruben : USB Drives
Steve : I-Phone, Headphone, USB Drives.

Everyoneʼs got a hidden talent. Whatʼs yours?
Ruben : I see dead people
Steve : I can walk on walls

We’re reaching the end of this interview, would you like to say something to your fans who are reading this one and who have supported you during all these years?
Thank you so much !!! We hope we can keep making everyone happy with our music and keep having this Smashing parties all over the world cause we truly love it and all of you guys.