For better or worse, Hollywood’s take on the “EDM Generation” is here: We Are Your Friends hits Australian cinemas tomorrow (August 27) and the big question everyone’s asking is whether it’s a clubbing classic in disguise or as terrible as the trailer suggested. The verdict? Much like some mainstage music, it’s big, brash, obnoxious, and at times teeth-gratingly cheesy – but it’s also a whole bunch of fast-paced, hyped-up fun.

IT’S #ASPIRATIONPORN FOR WHITE BROS
We Are Your Friends is a timeless rags to riches tale of bro-hood, following aspiring 23-year-old producer Cole Carter (Zac Efron) and his buddies as they try to hustle their way to fame and fortune in LA (with a love story side-plot along the way, and some grand messaging about how you truly can achieve your dreams if you just try really hard).

Emily Ratajkowski of Blurred Lines fame stars (and succeeds) as Carter’s Manic Pixie Dream Girl, while Wes Bentley is the cynical, successful older producer James Reed, who becomes a reluctant mentor for Carter (like Yoda with a drinking problem). But mostly WAYF is about Carter and his “young hustlers club”, who’ve apparently been cast straight out of a ‘90s boy band. 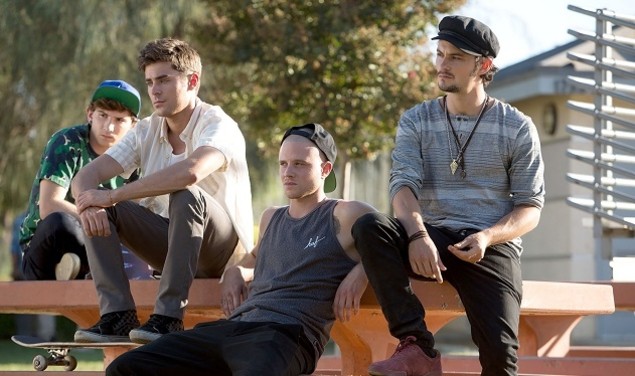 That’s Cole Carter’s plan, but unfortunately his music sucks – it’s a generic hodge-podge of four-four hi-hats, dubstep wubs and fidget drops. Luckily, washed-up veteran producer James takes a shine to Carter (as does Reed’s inexplicably doting girlfriend), and decides to teach him the Way of the Producer.

On his journey, Carter has to overcome obstacles and crises of faith: falling in love with his mentor’s girlfriend, losing his mentor when he finds out (but getting his friendship back, like, two weeks later), losing a friend, and facing moral tests about money and righteousness.

It’s not the rockiest road of self-discovery ever committed to film – but that’s not what most people were worried about when the WAYF trailer first dropped. The main criticism was that it all looked like a cash-in on the dance music explosion. Which it (kinda) is: but in among the coming-of-age tropes and “relevant” references, there are some genuinely relatable moments of truth. First, though, you’ll have to make it past those clichés.

IT CELEBRATES ALL THE NEGATIVE STEREOTYPES ABOUT “EDM”
Quick, easy fame: check. Huge pay cheques and admiration for doing something that doesn’t actually look that hard to a layperson: check. A bro-centric, straight white universe where the only women are projected fantasies and cavorting babes: check (and don’t even ask about people of colour and the queer community). Bro-ing out with your bros and scoring with aforementioned cavorting babes: check.

If you were to make a dot-point list of all the terrible things people think about “EDM” and put it into one movie, WAYF is pretty much what you’d get. Put it this way – it’s not the kind of film Margaret and David are likely to award five stars to anytime soon. 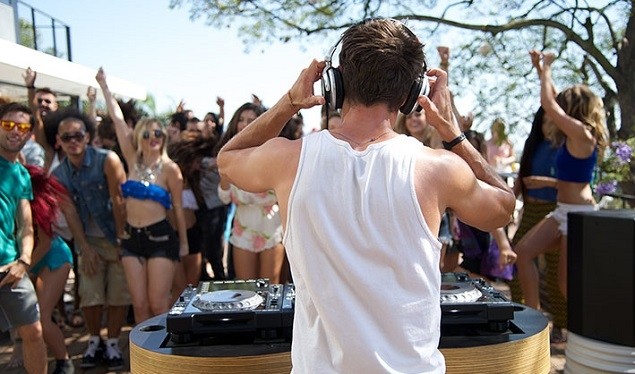 BUT IT ALSO CELEBRATES EVERYTHING THAT’S GREAT
That being said, We Are Your Friends does grab hold of some undeniable and relatable truths. It’s got the thrill of making it past festival security with your stash and your crew. The anticipation at the start of a night, when your whole squad’s together and anything could happen. The debauched abandon of losing control and watching the night swirl by in a blur of strange moments.

There’s the uninhibited joy of falling in love with someone while on MDMA. The visceral kick of a really good tune. The struggle of everyone who makes “art” to get beyond imitation and find their own style. And by the end of its 90-minute run time, you’ll want nothing more than to go raving. (What else could you want from a film about dance music?)

It rampages along at Adderall speed, leaving no time to get bored or contemplative, jumping from club scene to pool party to EDC-like festival to house rager. And if you forgive its flaws and embrace it for what it is – the movie version of a club banger – then We Are Your Friends succeeds. Come for the party, tune out the cut-price Tumblr philosophy, and you’ll have a good time.

ALISON WONDERLAND – LOST MY MIND ⠀ With a soun

Neverland is prepared to serve your Valentine’s