Diving into another leg of our interview series we venture to Berlin where Spanish born brothers Xabi and Luis of the House duo Kyodai discuss their childhood, musical journey, and the pressures of wearing all black.

Music was obviously a big part of your lives growing up. What are some of the earliest memories you have of music having an influence on your household?
Our childhood was definitely one filled with music. We grew up listening a lot of Jazz, Soul, and Classic. Some of our very early memories were made with the albums “Hotter Than July” – Stevie Wonder and “Spectrum” – Billy Cobham playing in the background.

We hear your father gave you an education in classical and jazz which shows up all over Kyodai’s music. At what point did you discover Electronic Music and when did you realize as artists you wanted to head in that direction?
Yes, our father is not only a scholar in the conservatory but a jazz musician and he taught us from the very beginning. Growing up we had a Jazz club in our hometown where we did jam sessions and concerts. I’m not sure exactly when but at some point we felt the attraction of Electronic Music in the club and we started to try to persuade our father to start playing more Jazz influenced club music like Acid Jazz, New Jazz, House. etc… It was around this time we started to make our first demos of Electronic Music which consisted of mostly Techno tracks. When our recording and sequencing skills began to improve we launched our first Electronic project which was called Wagon Cookin’.

What does your dad think of Electronic Music?
Hehe, that’s funny because our father didn’t understand what we were trying to do at the beginning when all of our sound and demos consisted of very hard Techno. Lets just say it took him a little while to come around. It wasn’t until our Wagon Cookin’ period, when we started doing more “musical” Electronic Music that our father took an interest, and since then has recorded on a lot of our tracks throughout our career.

When and where did your journey as Kyodai officially begin and how did it lead to Berlin?
We started Kyodai with our release on Freerange Records, “Mi Rumba EP” in Sep of 2011 in Madrid. During that time we were still involved with Wagon Cookin’ and were in the middle of launching our fourth album called “Eleven” on Om records San Francisco. After about a year and a half we finished the album tour and we moved to Berlin where we started to focus solely on Kyodai.

Being brothers it can’t always be easy to work together? Give us an example of a disagreement you’ve had recently.
Ha! Luckily we don’t have many disagreements, but the most common is when we are creating new tracks at the studio and the magic comes. We always fight to take control of the computer’s mouse. We honestly need to get a computer that has two.

Do you ever feel the urge to break each other’s neck?
Thankfully we don’t reach that level very often, but fingers crossed, maybe today is the day.

Speaking of breaking necks, I remember hearing “Breaking” a few years ago for the first time and being like “whoaa, that’s the groove.” When you finished producing that track did you know you had something “big” on your hands?
We remember “Breaking” being something totally special because we definitely took a lot of risk by putting some different elements in a House track like the drum breakdown, etc, that we weren’t sure would function in the club. But in the end we knew we had something. It’s probably our most important track so far.

Stylistically how do you see the evolution of your music? In what direction is your sound heading?
When we created Kyodai our propose was to focus on Club Music in a more defined way compared to our previous projects. Our challenge is to create Deep, Mental, Techy, Experimental Music, with a touch of Jazz. This spirit shows up in our first release and we want to keep it this way.
.
What story is the Marea EP telling?
”Marea” is Spanish name for “tide,” and we wanted to use dark synths and percussions to interpret the feeling of the tide.

If you live in Berlin you must own a bike?
Of course! We are very happy with our bikes in Berlin and we use them a lot.

What next for Kyodai?
Well, we are involved in a lot of interesting releases this year, all of them being original tracks because we spent the last couple making a lot of remixes. We are currently thrilled with the launching of “Marea EP” on OFF recordings and have a bunch more to look out for:

We’re also preparing new track in the studio for the next season that we will release on our classics labels.

Now be honest, do you feel any pressure from all of your DJ buddies in Berlin to only wear black clothing?
LOL! At least now we can combine the black clothing with flowered Hawaiian T-shirts! 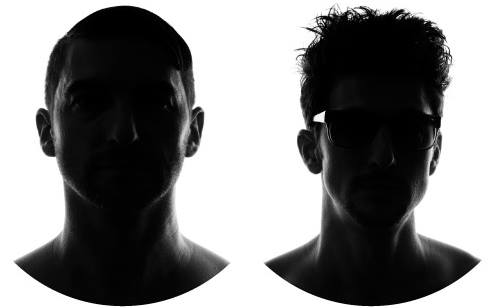