Tell us about the awards and achievements in your career to date ? How old you were you when you won them and whats your most recent accomplishment?

​i-DEE – I won my first DMC US title back in 2005 which was the US Supremacy Championship in San Francisco. I was fresh out of High School and recently turned 18 years, but had been DJing already for about 8 years. I was most recently crowned the 2014 DMC USA Champion, which was my second US title, and 2014 DMC Online World Champion. Becoming a DMC World Champion had been one of my lifelong goals as a DJ and to finally see it come into fruition after years of hard work was a huge accomplishment to say the least.

How do you see your music style has changed since you started touring globally and professional DJing?

i-DEE – I’ve always been an open-minded individual when it comes to music as whole, especially since I was a child. That said, I’ve always tried to incorporate a little bit of everything into my sets so that everyone leaves satisfied – young or old. As a DJ, I feel you’ll always need to reinvent yourself and be able to adapt to the different fusions of dance music that are out there. For example, I love going from Twerk to Classic Hip-Hop, back to Future Bass and a bit of gritty Trap. I see no line really when it comes piecing everything together and aside from my accolades, it’s one of the key essentials to my success outside of the battle realm.

Is this your first time in Asia and more specifically Bali? How do you picture Bali and how does the Asian music industry compare to somewhere like home?

i-DEE – This will be my 5th or 6th time to Asia I believe, but my first time in Bali though. Coming from Miami, I’ve always heard stories about the similarities between the two cities especially when it comes to beautiful beaches and amazing nightlife. I really can’t wait to actually see it for myself .

The amount of potential within the Asian music industry is quite insane in a good way and I feel a lot of that attributes to the influence of westernized culture, but I feel the Asian way of doing things are sometimes to take that influence and make it 10 times better. Some of my favorite places to play because of those reasons are Beijing, Taipei and Singapore. I went to a dance competition in Chengdu a few months ago and it was one of the most amazing dance performances I had ever seen. If I ever had any desire to live in Asia at any point, this would definitely be one of the huge selling points for me and I don’t think it needs much convenience for anyone else. You just have to experience it.

​​Where is home by the way? Where do you play at home and your favorite club to jam at? And Abroad? Your favorite local club you just cant get enough of?

i-DEE – I grew up in Northern Virginia, right outside of Washington, D.C.. My family and friends that I grew up with are there so that place will always be home to me. In D.C., it was always a long commute away from the coast so when I was 18, I decided to pack my bags for Miami Beach. My soul craves water and ocean so it was an easy choice for me.

Since I’m busy traveling so much for shows, I tend to resort any home clubbing to catching up with friends. One of my good friend’s DJ K-Razor is one of the residents at LIV, which is one of the top nightclubs in the world in my opinion. Each time I kick it with him, the most random folks will be in there from Rihanna to Flo Rida, just hanging out amongst the guests.

I think one of the best places I’ve played at so far to date was probably a toss-up between the O2 Arena in London or the 9:30 Club in Washington D.C. 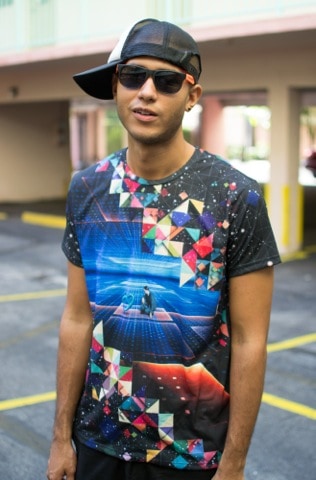 Growing up in the hip hop scene who were the DJs and producers that played a huge influence in your circle of friends and hood?

i-DEE – I think DJs like A-Trak and Craze were two of the main influences that inspired me to actually become a DJ. I come from a collective DJ crew called the Trooperz who were originally from the D.C. area. I was the youngest member of the crew, which included ENFERNO, so they were able to help mold and guide me as a DJ primarily when I was up and coming within the battle scene. I was a hardcore Gang Starr fan as a kid so I was obsessed with anything DJ Premier related so he’s another cat that I’d be into.

As a producer, I looked up to a lot of the Virginia-bred folks like Pharrell and the Neptunes, to Timbaland. Most recently, I’ve been listening to a lot of Jack U, Major Lazer, Nadastrom, more on the dance tip.

What were the 5 first tunes you purchased with your own money?
Are you still playing any of them now in your sets?

i-DEE -Wow. Ummmm… I think some the first things I bought was actually a Sting record, Mase’s Harlem World, Biggie’s Ready to Die and maybe a few battle records. During the whole East Coast/West Coast feud back in the mid-90s, a lot of the east coast stations were heavy on the Bad Boy stuff and not much Dre/Pac stuff so as a result, I was a Bad Boy head (lol) which I still play a few joints out still to this day.

2 biggest tunes in your sets right now and why do you think they are working so well?

i-DEE -Major Lazer & DJ Snake – Lean On and Timmy Trumpet ft. Savage – Freaks. I know Freaks was huge last year, so it’s still holding weight thanks to it’s catchy lead synth and I think the sample applies to Lean On. Lean On is just one of those cool summer tunes that just takes the pain away from whatever it is that you’re going through and are just trying to go out, have a good time and shake that stress off.

What do you think of Dr Dre’s new album and which is your favourite tune on the album ‘Compton’?

i-DEE -I thought the album was magnificent. I know a lot of people were expecting a ‘2001’ vibe, but I thought that was just silly. Dr. Dre reinvented himself perfectly and not only contributed to the current state of music with a timeless piece, but elevated it as well. I’m a sucker for DJ Premier so ‘Animals’, which he helped co-produce was my favorite joint.

Whats next on the I-Dee memo list? Where you playing at next and anything we should be keeping a eye and ear out for ?
i-DEE -I have a lot of production that’s been compiling for the longest time thats slowly coming out. As i-DEE, I’ll be releasing a new twerk single called “Krumpet” before the year is up and will be doing a tour in support of that.

I’m also working some side remix projects with Ruen and Mister Gray, a powerhouse production/DJ duo from Miami Beach. Oh, also myself a Darku J are working on a few originals and remixes too. All my music will be free by the way on my SoundCloud