The Adana Twins are from Hamburg and have captured house music enthusiasts attention at a alarming rate over the past few years due to their consistent and quality releases they put out. What do the guys do when they finally land their feet at home? How do the write music while on the road all the time and how do they compare Hamburg to the Techno capital of the world sister city Berlin? Thats just the tip of the iceberg in our interview with the dynamic duo ahead of their set thats going down this weekend at Jenja.

I understand that you have had a pretty heavy touring schedule over the past few months. How are you both holding up?
We try to do more sports – but… mhhh. We are working on it. The best thing while you travel is to drink a lot of water and try to get some sleep.

When you are on the road for weeks at a time, are there any restrictions that you put on yourselves to stop you from crashing or do you tend to go with the flow and see what happens?
It totally depends, but when you have three or four gigs in a row it makes a lot sense not to party too hard on the first show. But sometimes you just don’t have a choice…

You must have to learn to get a long with each other pretty well with being on tour so much, is it love or just lots of practice?
I think it is like in every strong relationship – you have good and better days. We see a lot of benefits about being a DJ duo: travelling together and sharing all these beautiful moments; you can talk about different things, exchange on music…

After a tour, and if you have a few days to yourselves, what do you do in your hometown of Hamburg to unwind?
When travelling so much, it is always best to do just nothing and take some time to recharge! Catching up on some sleep and catching up with friends are the most important.

Has it been difficult for Hamburg’s scene to gain recognition with Berlin being such an immense hub for electronic music?
Berlin is a Techno City. Everybody around the world is asking for Berlin, but Hamburg is the insider. Hamburg always had a strong House scene and labels and producers like Solomun, H.O.S.H., Koze, Digitalism, Erobique, DIYNAMIC, JEUDI, LIEBE DETAIL or PAMPA were always based in Hansestadt Hamburg. Our good clubs are an important part of the scene. Of course a few people moved to Berlin, but Hamburg enriches the scene and we are having good communication here. Hamburg is like a family!
Being honest, for us it´s much more exciting to act from Hamburg, having the purpose to get deeper into the peoples brain than to move to the capital just because it´s hip. That´s not our style. We are working hard everyday to push Hamburg forward

Can you still remember one of the first vinyls you both ever purchased?
Friso: I really can’t remember but I know that I started taping my first electronic musikshow on my old boombox when I was 10. I still have one of these tapes. Jeff Mills was far ahead.
Take It Easy: I Do Remember! It was ‘Alte Schule’ a Sampler from MZEE Records, Stieber Twins ‘Fenster zum Hof’ and Boogie Down Productions: ‘South Bronx’.

Did you ever skip school to go mix or make tunes?
No we always were prigs at school but always tired because the nights were too long.

The music industry is a tough place to learn your trade. Did either of you guys have any mentors at any stage of your career?
Because we are coming from another section jobwise, everything was new and obscure but we always had the luck to meet the right people. At this point we must give a special thanks to Daniel from Jackmode and our network in Hamburg is a little teacher as well. Isi from Digitalism for Example was giving good tips. As we said: Hamburg is helpful! 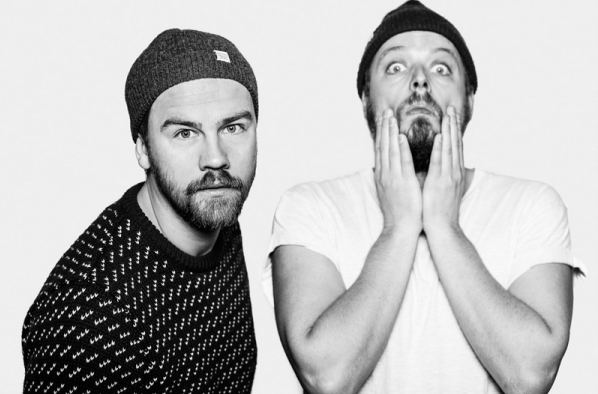 What made you both want to combine forces and become the Adana Twins in the earlier days?
We studied together and started making our own parties. We would always hang together and help each other. It was a logical consequence that we started making music together. We never asked for a reason. It is what it is…

Do you ever produce music whilst on the road?
Friso: On the road we start making the sketches and maybe some beats but it´s not that easy to finish a complete song.
Take It Easy: Exactly. On the road we do the sketches.
Preferably after a gig because we are having the best ideas after performing. Finalizing is in Hamburg!

In your opinion who would you classify as a ‘DJ’s DJ’, someone everybody should catch a glimpse at live?
Friso: I love watching Kink live! He is really inspiring and a DJ´s DJ.
Take It Easy: Unfortunately my favorite DJ is not alive anymore. It was DJ Mehdi. I always admired him. He had such energy and charisma, I´ve never seen that in another person. Every time he came to town, I had to see him, and he was incredibly inspiring every single time. RIP

What would you say is the craziest thing the Adana Twins have witnessed from behind the DJ booth?
Once we had a party with the Keinemusik Boys in Hamburg and TIE was serving shooters topless and fell asleep in the club afterwards. Hahahaha.

What advice would you give to any young aspiring DJ’s & producers interested in taking things to next level?
You cannot force everything. The moment and the vision is important. Above all: do not bug anyone. If your song is good it will be found.

Catch the legends that are the Adana Twins this Saturday September 19th at Jenja.
Be there or be square! yeeew.