The Manufactured Superstars are the Denver-based DJ/production duo comprising of Beatport founding member Bradley Roulier and Beatport original employee Shawn Sabo (both are now current members). Festivalgoers will know the duo by their immediately recognizable getups of matching NASA spacesuits and yes, they were even hired to play Sir Richard Branson’s official party for the launch of Virgin Galactic, Branson’s company offering private flights into outer space. Music fans will know the Manufactured Superstars by their radio-friendly hits, including, “Take Me Over” featuring Scarlett Quinn (which lasted on SiriusXM Radio for many many weeks, as well as the music video on BPM-TV at the #1 chart position); “Silver Splits The Blue” featuring Christian Burns (a collaboration with Jquintel & Jeziel Quintela); “Born To Rock” featuring Selina Albright (a collab with LA Riots); and even a bootleg of the classic Annie Lennox song, “Little Bird.” The latest tune to come from the Manufactured Superstars features none other than U.F.C. Octagon vixen (evidently she is also a decent vocalist), Arianny Celeste, on the track “Top Of The World.” 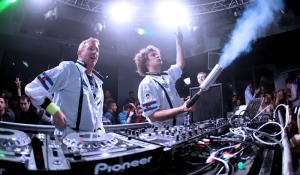 For those of our readers who are unfamiliar with your sound, what three words would you use to describe your music?
Fun, fun, fun! [laughs]

Did you both always know that you wanted to me in the music industry? How did you get started?
I started as a promoter in 1997 throwing the biggest events in Colorado. Shawn was a jungle and drum-and-bass producer starting in 1999. Then we started Beatport in 2004; so, yes, we are products of EDM.

We love the astronaut motif you guys are known for. How long has it been a part of your look, and what was the inspiration?
We wanted to do something fun and different — we didn’t want to take ourselves too seriously. We take what we do seriously, but we don’t take ourselves seriously. [laughs] We wanted to make a full-on party spectacle that’s about the crowd, the vibe and the music, and to take all of those things and make them entertaining. Our original name was “Digitally Manufactured Superstars,” but that was a big mouthful so we shortened it. What’s really nuts is that a lot of our fans are now starting to show up at gigs… wearing their own spacesuits! [laughs] They rock out in the front row and that is just so awesome. We now give out the black nerd glasses at each show and by the end of the night, everyone’s wearing them.

To what extend do you think all artist these days are “Manufactured” by their record labels, social media, management and the like?
That’s kind of a loaded question, but to be honest I don’t think anybody is “manufactured” in a literal sense because there is so much work that goes into it. The term “manufactured” means that an artist has a team of good people working around them. It’s hard for any artist, whether in pop, dance, or hip hop, to break out and build a brand in the music industry without a full team. Manufactured Superstars is really just a play on that.

We have ween quite a few of your shows. What is your philosophy of the live dj set?
Fundamentally, we do edits of every track we play. We want to be different than other DJs and play what are the best parts of the song to keep it the most fun. We love energizing the crowd and making everyone have a good time. We also don’t take anything too seriously. The biggest thing is just playing good music that’ll take boys and girls on the dancefloor on a journey through different styles, from house to progressive.

What do you think about mashup culture (i.e. Girl Talk, 2ManyDJs, etc)?Our style is a little bit mashup, but we’re really more house DJs. Every DJ edits, especially on the international circuit, who just plays regular songs unedited. Manipulating music is part of DJ culture and the skill set will continue to evolve. That’s what we like to focus on with Manufactured Superstars, to try to keep people on their toes and put two, three, four songs together, or two or three different remixes of a song to make things a little bit different.

You’ve played at a ton of amazing music festivals. What makes playing a festival so unique? What is your favorite festival to play? Any that you haven’t played that you’d like to?

Electric Daisy Carnival is our favorite and we plan on playing some of the EDC festivals in the UK and Europe.

You’re known to play a lot of great “old school tracks.” If you could do a show with any other artist, dead or alive, who would it be?
Bell Biv DeVoe. [laughs] No, it would be Deadmau5, Tiësto and David Guetta. We are fortunate enough to open for them, on occasion.

What is the best way for a fan to approach you?
At a show just come over and say hi, and if we have the time we’re always more than happy to talk to people. It’s just sometimes when I’m running through the club scatterbrained in between five conversations it’s a bit tough. But just go ahead and say hi!

If the world were ending in less than 3 minutes, and you had an ipod with every song ever made on it, what would you listen to?
I would put it on shuffle and let it randomly pick one.