Growing up in a small Welsh town, Jamie Jones’ taste in music didn’t quite match that of his peers. With a passion for house music from an early age and a stack full of vinyls from the local record shop, his interests were a far cry from the accepted Brit pop phenomenon of the time. But fast forward a few years and you’ll see that this difference didn’t exactly do him any harm. Credited with creating a new sound in house and techno the DJ has, in less than a decade, revolutionised the genre and paved the way for newer, more experimental ideas in music.

Tell me about your first set-up.

I first learnt the basics of sequencing and how to put simple tracks together when I got this game called Music 2000 on the Playstation. It was pretty simple, but it got me hooked on making beats and melodies.

I got a PC; I think I got a version of Reason to start off with. I was making loads of little tunes with that but was never really happy with the sound that I got out of it. Finally, when I started putting parties on in London, when I had a bit of money, I bought a little Macbook Pro; just a 12-inch Macbook Pro, got Logic, just started making tracks with Logic and then eventually I bought a microKorg and some monitors. That was what I had for a while and then gradually from there, sort of [it’s] gone to what I’ve got now, saving up… I put a lot of money from DJing and releasing records back into my studio. 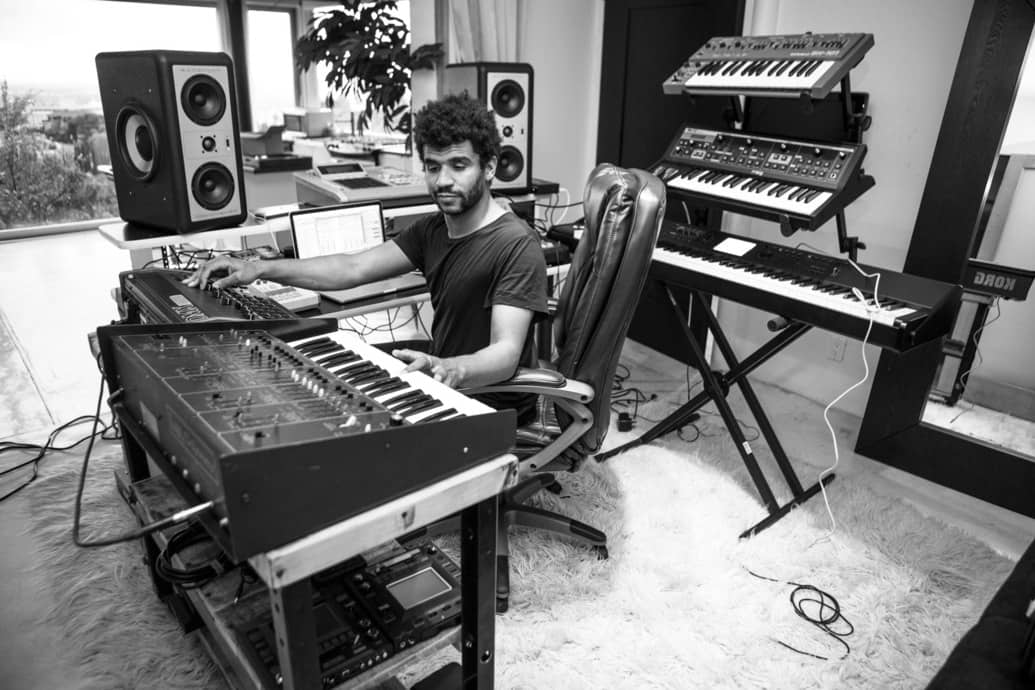 How would you describe some of those early compositions on the Playstation?

They were like proggy, trancey kind of. It was quite musical, actually. I made one one year and I actually played it out. I had a gig at Pin Up in Ibiza, this was going back… Pin Up was—I don’t really know if you know about it—but Pin Up was only up for like one summer… I sort of, at the time, was just getting into early Metro Area stuff, and Daniel Wang and early cosmic-y, disco house and there isn’t really that much of that going in Ibiza and I convinced the promoter to let me open one of the back rooms early and play in there, playing that kind of music, and I’d made this one tune on the Playstation and I remember playing it out. It didn’t sound very good!

How long do you think it took until you were satisfied with the results you were getting? Was there much of a learning curve before you sat back and thought “Yeah, I’m happy with this”?

Totally, massive. I’d been making tunes for years and years and years. I’d made a lot of them and listening back to them, some of the ones I made before I even released a record, some of them I’ve beefed up the sound and I play them out now. I might even release them. I’ve become a lot more adapted to doing things myself, mastering them, and they sound… the ideas were there back then, but it was just a case of the years spent training your ears to get things in the right places, get things sounding good enough for release.

When did your love turn to dance/ house music specifically?

My cousin who was a little older than I and definitely the wild child of the family used to bring back rave tapes, I remember having a recording of a radio show by Stu Allen on Key 103 in Manchester. I loved it and listened on repeat. I then began an almost two year experiment in trying to make my own radio aerial that would receive the show from Manchester to North Wales. It consisted of me taping several old aerials and wires together and climbing onto my roof. Of course it never worked.

How did growing up in Wales inspire you musically?

It didn’t. Everyone liked Oasis and Welsh bands, singing in Welsh. I was into house and drum and bass, and the Chemical Brothers. The only god thing was there were two good record stores in Bangor, and I went there whenever I could, usually buying what I had heard on Giles Peterson or Pete tong’s radio shows.

I’ve done some pretty crazy things at Burning Man, there’s all sorts of weird and wonderful things to do there, but I’d rather keep them between me and my friends! On the last leg of the Furniture music tour in Australia myself and my tour manager got very drunk and stole a golf buggy. We drove it out of the festival and around the perimeter and almost ran two people over. We drove it back to where all the top level staff were hanging out they didn’t look too happy, but we of course found it hilarious in our drunken state!

Since you started in the industry what differences have you noticed in the dance and house music scene?

I mean, where do I begin? When I first started there was no digital music to speak of, everyone just went to the record store every week, which has actually come full circle and now vinyl is back in a big way. When I first started touring the UK I was the first established artist to play some of the smaller cities, now the scene is huge clubs in every small city, and house music is the music that university kids listen to predominantly. In the US I’m not sure kids had even heard a 4/4 beat in most places but now it’s huge. House has grown from a niche music genre to a global phenomenon, there’s still niche styles and artists but they are supported by a larger world that filters a greater audience down so the most underground DJ plays to 800 people rather than to 80 all over the world.

Why do you think people are embracing house music now?

Technology has allowed people to make music much easier. People are making it on their phones! I’m not sure how good it is but it’s happening. I guess kids have stopped picking up guitars as much and now they just download some app or software. They relate more to electronic music.

Talk us through your creative process, how do you go about creating a track and how do you know when you have a hit on your hands?

Drums are the most important part. The mid bass levels, so the baseline and the kick, that’s the frequency that makes people dance the most so I tend to spend a lot of time on that. I have a lot of analogue vintage equipment in my studios so I just tend to play about a lot, record and then chop everything up. The jamming bit is probably my favourite part of my whole job.

What technical skills do you possess that make your sound unique?

A lot of the tracks I play will be my own re-edits. If I hear a record in the shop or whatever, but only like maybe one minute of it, I will still buy it – I can then take it home and re-edit it, add some of my own little elements and have something that’s personal to me.

I also use a SoundBITE Cycloops loop machine when I DJ as it adds another dimension to my sets.

Which living DJ do you most admire and why?

I think it would have to be Laurent Garnier. He is mainly famous for being one of the best techno DJs in the world, but he’s also produced some amazing records over the years. I havent heard him play for a few years now and I don’t always like what he does, but he seems to always push the boundaries and is one of the few people who has managed to keep his credibility over the years.

He also played one of the best sets Ive ever heard, on the Space Terrace in Ibiza in 2002 and he played a J Majik drum and bass remix as his last tune. The place went crazy. I have always been into drum and bass and it was awesome to hear that on the terrace.
Please name any well known DJs that have supported you or bigged you up since you started out?

Dan Ghenacia has always supported me, I really respect him, he’s been kind of a mentor over the last few years.
Also Damian Lazarus, I have a massive amount of respect for him also, he is a good mate and has always supported me and given me props.
Finally Clive Henry, he is a really good friend, and has been spreading the word and supporting me.