Brighton boys Ben Prok & James Fitch joined forces after meeting in a record store in 2006. Both DJ’s in their own right with 18 years experience between them, they discovered that their tastes were very similar and became the formidable DJ duo we know today.

Prok and Fitch is less of a tongue twister than Prokopowicz and Fitchett, but were there other potential names in the pipeline at the beginning?
Ha ha yeah the full names don’t exactly roll off the tongue. We were both dj’ing separately well before we started working together, under the names Ben Prok & James Fitch. We both had solid residencies and with busy diaries it made sense for us to keep part of our names and bring them together, so it was always going to be Prok & Fitch.

How did you two get introduced to dance music?
James: I was living in Spain at the time of the acid house explosion. I was 12 at the time and my brother used to go to all these clubs in Madrid bringing tapes back the DJ had given him. I used to nick them off him when he wasn’t around and record them, then spend hours in my room with my headphones on wondering what it would be like to hear the music in a club. I became obsessed with the music and have craved it ever since. I fortunately had my bike stolen when I was 16… the insurance money paid for my first set of decks. That said, I’d been wiring up my dad’s CD decks to a cheap mixer since I was 14.

Ben: I’ve been into dance music from a very young age, apparently raving it up to the sounds of madness in my highchair. Getting into house music through the legendary Sterns, then started putting on a few parties in and around where I grew up, renting village hall and blagging marquees. It was all a little time consuming so the next step was getting behind the decks.”

We had both been DJing separately and James producing, long before we met 7 years ago. James had spent the majority of his time living & playing around Valencia & mainland Spain. Where as I spent two summers playing In Ibiza, then a 4 year Residency at The Honey Club. Although we were playing to completely different crowds, we both knew how to get the dance floor going, James playing more peak time house and myself playing slightly deeper.

How did you meet each other?
Ben: I used to work in BPM Records in Brighton, James used to be in a lot buying tracks. I knew he was producing music as his track ‘Pass The Funk’ was doing the business in the shop. I’d always wanted to get into production, so had a chat with him to see if he fancied redoing ‘Outro Lugar’ – he was also a big fan of the track, so the next step was the studio.

What or who is your biggest musical influence?
Daft Punk without a doubt paved the way for electronic music as we know it, amazing producers & a huge inspiration to both of us.

You guys get around and are seen popping up across the globe to play sets, it’s a “standard” question but one I’ve got to ask – where is your favourite place on earth to play and why?
The travelling, experiencing new cultures, seeing new sites and eating different food has to be the major perk of our job, its something we’re extremely grateful for. It’s a real tough question picking our favourite place to play, but we would have to say Ibiza, it’s a unique special place, the clubber’s there are always open minded and definitely like to let loose and have a party. We’ve had some of our most memorable gigs to date on the island; the Space terrace is very hard to beat.

Describe to us your sound.

Groovy peak time house, made for the dance floor. Good grooves, some vocals here and there and more organic sounds. We think people have become a bit obsessive about genres, unfortunately it pigeon holes you in something for a certain public, when really a lot of the time it’s very accessible to lots of different people! We call what we play house, yet if you put the tracks we play in to genres they cover everything: House, Tech & Progressive.

As a DJ, what has been the most surreal moment in your career so far?
It would have to be when we played at Ultra Festival in Miami. The whole experience was crazy, we had just flown straight in from an after hours party in Chicago and hadn’t slept for a couple of days. We were picked up and ushered on straight to our private cabin on one of the biggest boats we’ve ever seen, as we were walking down the corridor it was crazy sharing the same floor with the biggest names in Electronic Music; Eric Prydz, Deadmau5 & Dubfire were just some of our neighbours.

The fans are clearly enjoying your music, you have a very active social following – where next for Prok and Fitch?
We’re both very social and enjoy engaging with new people, our musical fans are loyal and its great to see so many familiar faces returning to our gigs. It’s pretty tough maintaining a good online social presence, but so important, we find it much more enjoyable doing it face to face over a shot or two. What’s next? Well at the moment we are balancing touring with a lot of time in the studio, we’re in a really good place musically and have a lot of new music to come your way! 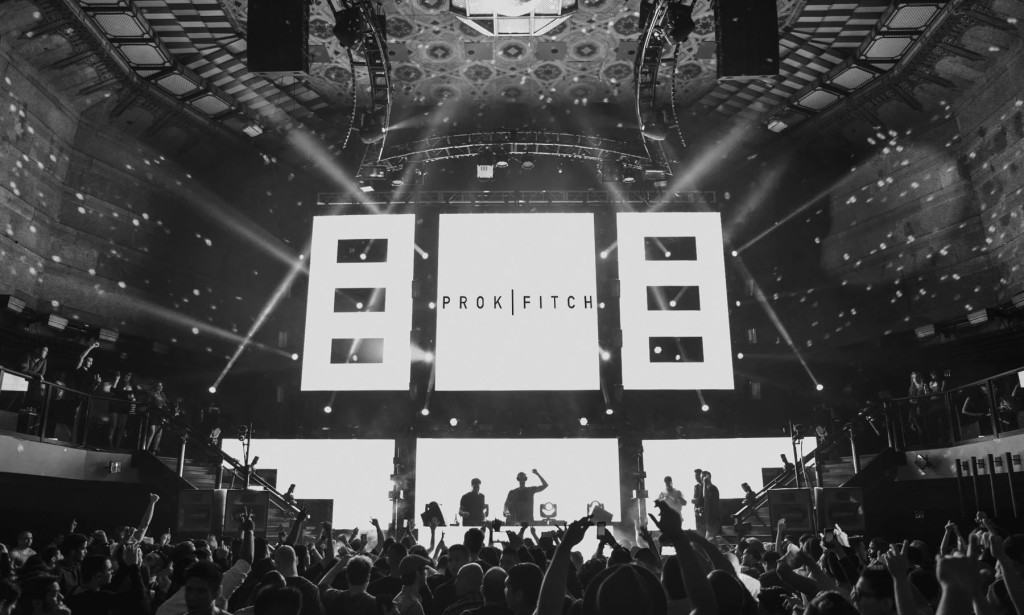 Speaking of your social following, you seem to share your sense of humour with your fans – do you think it’s important for acts to not take themselves too seriously? Do you keep each other grounded?
Yeah we tend to not take many things in life too serious, we like to have a laugh and be as open with our fans and friends as possible, and its nice to hear that comes across. Every artist is different and its up to them if they take themselves more seriously with their persona, personally we don’t have a lot of time for arrogance or ill manners, life’s too short.

What examples have you seen when an artist has begun to lose a handle on reality?
Yeah we’ve seen this before, its horrible to see, it can be quite tough going from absolute euphoria of playing an amazing gig, to being stuck travelling by yourself for days. Also you tend to get a lot of praise from people when your working, its not uncommon to see this going to an Artists head when that’s what they are surrounded by week in week out, and they can soon lose a grip on reality and what really matters in life.

Dream situation time… you can go back to any period in clubland history, and play at any club. Who would you have playing alongside you and what tune would you drop that would define the evening?
That would be cool, would have to be the old Space Terrace (Open Roof) Joris Voorn playing before us and Carl Cox banging it out afterwards, the track would have to be Three Drives ‘Greece 2000’.

Bonus Question: What has been your most embarrassing moment in your career?
We were in Russia few years ago doing a gig and when we got to the hotel (in the middle of nowhere) in some town you’d never of head of, we checked in and we’re both pretty desperate to get some rest before the gig, also pretty desperate for a nice toilet as well, as we’d been travelling all day. Lights off head down—’bang’! The toilet exploded and the room soon filled up with various liquid and solid material, the receptionist was screaming in Russian (we don’t know what) and we were quickly escorted to another room, after wading through. The moral of the story is—if you go to Russia, shit out the window!!