The Pachanga Boys live in the spaces between molecules. They breath in the silence of outer space and breath out stars. Does it even matter where on earth the Pachanga Boys were formed? They are ondas de sonido and sinnlichkeit.

The Pachanga Boys are Superpitcher and Rebolledo. German musical magician Aksel Schaufler and that magnificent Mexican known as Mauricio Rebolledo are making the world a better place with their Hippie Dance.

Cheese from Cheesetown, Boots from Boottown. But where can we get Pachanga Superior Power Elixir and what are the ingredients?
That’s a very complicated task… a special guy does it for us… We wish we could tell the ingredients, but this would mean bad juju for the rest of our lives…

Pachanga Boys is a pairing of opposites – crudely, a stiff German and a wild Mexican – who somehow complement each other beautifully. What happens when you get together?
This is what we always say! We are so different from each other, but we somehow match in certain things.

Where did you meet?
Rebolledo: I met Aksel in Mexico seven years ago when I was resident in a club called Santanera in Playa del Carmen. At that time a lot of people were coming to play, including from the Kompakt crew, and one new year’s eve Aksel came with Michael Mayer to play another party, and I got to meet all of them and we made an instant connection, Aksel and I, and started to be friends and kept in touch. He came back often and I would host him and then I started to visit Cologne. The friendship was there for a long time before we even talked about doing anything together.
And then – true story – one day I was staying at his place in Cologne and singing in the shower. When I came out he was laughing, saying, “Wow, I’m impressed.” He was finishing his last album Kilimanjaro at the time (around 2010), and asked if I would like to sing on a track. I said sure. During this process of helping him, he started to test an instrument and I started to sing – and he recorded it. That was how our first Pachanga Boys track came to life, ‘Fiesta Forever’.

So often you’re introduced as “two boys who had something simple and beautiful to say”. What is that?

We feel it every day but we still haven’t found the words to say it.

How is it different from the Pachanga Boys?
If Superpitcher is Blueish and Rebolledo has some red… Pachanga Boys is kind of Purple.

You then started your label Hippie Dance, which really captures the mood of Pachanga Boys’ own, strange world.
Rebolledo: Yes, two years after first track we decided to do Hippie Dance; to create our visual language and Pachanga world. It’s been really fun. Somehow, even though there’s only been a few releases, it’s become a a little cult label.

When will you produce a follow up for Time? Or don’t you have enough Time together?
We don’t believe in sequels, unless Silvester Stalone is involved. 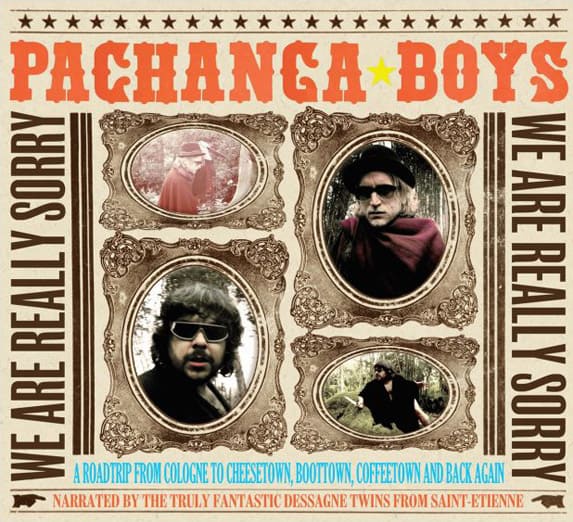 What is your opinion about the current state of the Latin American scene within the universe of club culture?

Everything is very globalized right now, I believe it’s becoming very individualistic. Rather than origins, people are currently seeking DJs because of their music, no matter where they’re from. Even though the current Latin American movement is going as strong as it can. There are many exponents from our continent that are going around the world coexisting with the global scene.

How do you approach playing at places where the music may be lesser known – a playground to test new tracks and sounds, perhaps?

Life is a playground.