How did you hook up the shows with famous comedian Russell Peters and how do the shows work? Where have you been performing with him and whats been the ‘funniest’ show to date?
Russell is actually one of my best friends in the world. I was even the best man at his wedding. He was a DJ even before he started doing comedy and he kills it on the decks. He bought one of my mixtapes in Toronto and contacted me to get more. We’ve been friends ever since. We’re just wrapping up a 2 year tour which took us to more than 30 countries. I usually do a 75-90 minute set before Russell takes the stage, then I’ll play some more afterwards and we’ll usually do an actual after party.

You are also producing music for Russell Peters show coming up on Netflix? Can you tell us some more about the behind the scenes work? Some of the music that you have produced for the show and as there anywhere we can check some of it out?
I produced all the music for his recent Netflix documentary “Russell Peters Vs The World” with my production partner, Tone Maceira (SpinTone Music). We also did all the music for his opening video sequence on this “Almost Famous” tour, and I solo-produced the actual theme track for the tour. The special should be up on Netflix this coming September. 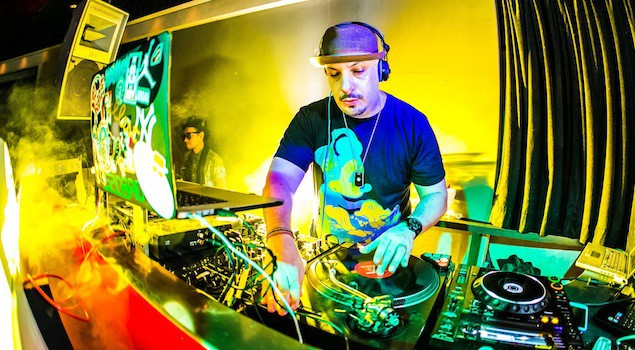 Anyone else you have been working with we might know? Any celebrities or famous music producers? Maybe another cool project we should know about thats hitting the www soon?
I’ve worked and toured with all types of artists, from hip-hop legends like Grandmaster Melle Mel to rock/pop stars such as Will Smith & Gwen Stefani… but right now I’m concentrating on my own production and trying to help some lesser-known artists find their place.

Your radio show is the most sydnicated show in the world correct? How do you get such popularity to your show ? Is there any advice you can give to anyone for building such a audience in a day and age where the technology is there but the competition is stiff. Link us up with your favourite show you have put together in 2016 so far!
I’ve been on NYC radio for quite some time, first on Power 105 and now on Z100. I also was the feature DJ on the heavily syndicated Live In The Den with Big Tigger show, so I guess I’ve developed a sort of radio following. The current syndicated show, Most Requested Live, is a part of the iHeartRadio family & is definitely more top 40. I believe we’re up to 160 radio stations every Saturday night. People tweet their requests and I try my best to get them on.

Your in Asia for a run of dates including Jenja’s ever so popular Urbanised concept. Where else are you playing in Asia on this run and recently? Is there anywhere in Asia that you havent visited yet that you would like to get to?
On this run I’ll also by doing my annual Golden Week Japan tour, with stops in Tokyo, Sapporo & Okinawa. This is my first time visiting Bali, so that’s very exciting. I also hold residencies in Singapore and HK, but I’ve never been to Beijing, and would love to check that out.

Your set up on the road consists of? And compares to your set up at home?
What technology are you using to DJ?
I’m a turntable guy, so 2 Technics or Pioneer turntables and a Pioneer S9 or Rane 62 mixer are my preferences.

Where do you see the whole DJ set up going to in the next 5 years with such innovative products available all the time its crazy to think whats actually around the corner.
I’m a purist at heart. I’ve seen a lot of technology come and go. At the end of the day give me Serato DJ, 2 turntables and a mixer and I’m happy.

Is this your first time to Bali? how do you picture the events here and the clubs?
This is indeed my first time and I’m quite excited. I understand the night I’m doing is a bit more urban/hip-hop… But I can play any type of party so I’m ready for anything!

What are your plans while on the island of the gods? Any bucket list sight seeing? Or maybe just relaxing poolside sipping cocktails?
I’ll be there for a few days, so maybe a little of both! I can use some sun on this pasty skin.

Whats next for Spinbad?
More of the same. I want to keep producing music for movies & TV and put out a proper record with the artists I’m in the studio with. I also have some new DJ mixes in the works and, most of all, I want to continue touring & discovering this beautiful world of ours & doing what I love most… DJing.