It’s said that DJing is a job that needs no qualifications, but experience always shows. Eddie Richards, “Britain’s Godfather of house and techno”, embodies this like no-one else. During his almost 30 year career DJ-ing, producing, label managing and having involvement with the underground house scene there’s not a lot Eddie Richards hasn’t seen or done. Eddie Richards is an integral part of the modern House scene, he has been around from the start and has played a pivotal part in the scenes movement. His achievements are numerous, establishing the first ever DJ agency, and his involvement in ‘Wiggle’ being only two. Eddie has been championed as a leader in the currently fabulous tech-house marketplace, but in reality, he is just playing the badass, tough music that has been moving dance floors for decades.

Through the years, you have been associated with different titles such as “Britain’s Godfather of House and Techno” and “Dance Music’s Quintessential Pioneer”, but we are more interested in how you came to be as “Evil Eddie Richards”. Can you briefly tell us the story of how the prefix “Evil” was associated to your name?
The name came about while I was resident at Camden Palace in London in the mid 80’s. The club was hosted by Steve Strange (RIP) and Rusty Egan of Visage, and was a follow on from their famous Blitz night which attracted many famous bands from the new romantic scene. The Palace was no different, only a lot bigger and ran more professionally. They had a PR company that would organise events. And for one of them, a Halloween party all the staff including DJs were asked to dress up. I guess I didn’t put enough effort in, as they said I should wear a badge. And on it was “Evil” Eddie Richards. I liked the way it sounded and used it from then on… Incidentally, the PR company used by the Palace was the inspiration for the the TV series ‘Absolutely Fabulous’. 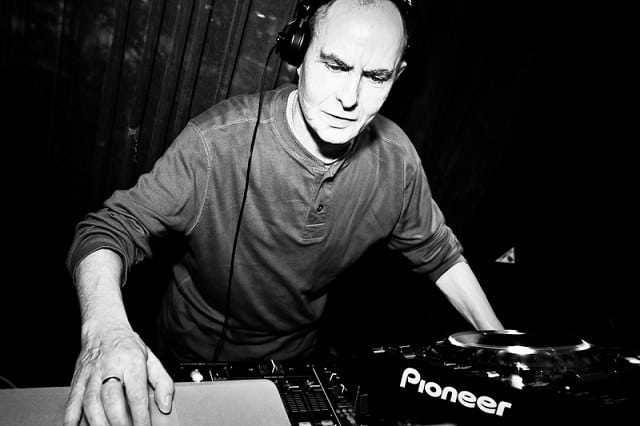 Could you tell us a bit about the scene you grew up in and how you got involved in underground dance music?
Although I had been running a mobile disco with a friend from school and I was DJing at lunchtimes in bars and pubs while I was at college in London, the place that launched my career was a bikers pub in Milton Keynes, believe it or not. Punks and indie kids also came along and would bring in their records for me to play. It was a pretty eclectic mix of styles and tastes but it worked and I discovered that I really liked a lot of the music, so I began buying it myself. It was at that time I dumped my ridiculously difficult to mix on belt drive turntables and purchased a pair of 1200s, after a visit to Heaven and seeing their setup.This was about 1982 – it was quite an eye opener and one of those eureka moments. I’d never heard music like it or a beat mixed in that way, so I hung around the caged DJ booth until I got noticed and introduced myself to the DJ so I could ask about the music and where I could find it. The DJ was Colin Faver. We chatted and hit it off so I invited him to come and play in the pub in MK, ‘The Starting Gate’. He must have liked our crazy little scene, since he put my name forward to DJ at a new big nightclub that had just opened in London that was hosted by Steve Strange and Rusty Egan of Visage. The club was called the Camden Palace. I got the job and was lucky to be a resident DJ along with Colin mixing up new romantic, post punk, synth-pop, new wave & anything else that took our fancy. It was the Fabric or Berghain of its day and got voted best club in the world. Good times. Funnily enough a few years later I also got a residency at Heaven, at a night called Rage.

What is the first 12 inch record you ever purchased? Do you still use vinyl as a DJ? Do you think it still carries importance in the 21st century?
I really don’t remember the actual first track I bought on 12”, but it could have been ‘The Adventures Of Grandmaster Flash On The Wheels Of Steel.’ Since then I’ve accumulated something like 15,000 twelves. I used to go out day after day on a mission to find everything I could. I ended up digging for vinyl in warehouses or record shop basements and going through collections all over the world, all the time learning and adding to my list of tracks or artists to look out for. I wanted to own the best of every style of dance music.

These days I don’t play vinyl out, its just too much of a pain to travel with – especially if like me you like to have a big selection. If I wasn’t travelling and just spinning in London I think I would still be playing vinyl though. About 9 years ago I switched to final scratch, then Serato, and now I use Traktor with control vinyl – it’s the nearest thing I can get to the vinyl ‘feel’. It’s great to see so many DJs still supporting vinyl though. I have to say was worried seeing so many record shops closing, but it seems like vinyl sales have been on the increase in the last few years.

When did you go international for the first time?
In 1987 I put together a simple acid track for Colin Favor to play on the then “pirate” radio station KISS FM, I had a call from Virgin Records, who released the track, and it went into the national top 20.

As a DJ who came from humble origins, did you expect electronic dance music to be where it is today?
To be honest, I didn’t think about how dance music was developing. I just expected it to be around and that I would be involved. And so I just kept doing my own thing without being overly concerned with trends or fashion. A lot has changed since I started out. DJs weren’t travelling much until rave went global and its now an international business. Many of the big name DJs have got a team of people behind them to handle their PR and bookings. And I think that having a good media presence is important for a new DJ to get established. But for me personally, I don’t need the hype and the type of work that it might bring. I like to think promoters book me for my music style, and not because I’m flavour of the month, or placed in a magazines popularity list.

As one of the earliest purveyors of House music in the U.K. during the mid 80’s, can you share to us how your sound has changed through the years?
I’ve always relied on my gut instinct when I select music, and I know immediately if I like a track. And from that point of view, I don’t think my sound has really changed over the years. It’s hard to define as it could be slow or fast, house or techno, instrumental or vocal… If it has a groove, and a bass line, and it grabs me- then I’ll play it regardless of the artist or label. Depending on the event and the mood, I’m in the style of my sets can change, and I’m selecting music depending on what I have coming up as well, as throwing in a few older favourites.

There were no choices when I started out. Only vinyl. And I went to several record shops in London Soho to listen and buy my music. To build my collection of classics, I used to have a wants-list, a book that I wrote down names of tracks or artists I had heard about, mainly by reading books, listening to the radio or talking to other music heads. And then spend hours digging through used bins, and record store basements, and warehouses wherever I could. I’ve pretty much found everything I was after now, and have an amazing collection. As much as I love vinyl, hauling round 20 kg. of plastic around the world became a chore. And I made the decision to play digital about 6 years ago. I still like the feel of vinyl and have been using Traktor with timecode vinyl. But it’s quite stressful when there are problems getting the setup connected, so I’m now using CDJs in in HiD mode with Traktor.

Back in the day, what would make a record “timeless”?
If you mean a Timeless track is one that has stood the test of time, there aren’t many really. Because music production quality is always getting better, and old tracks are going to sound old. They are “of’ their time” mostly. But there are a few I can fit in, that are favourites. Ive been digitising my collection to have everything available on my laptop when I travel.

I love the fact that I can buy almost anything at any time, day or night, wherever I am in the world and have it ready to play almost instantly. It’s a shame that the popularity of digital music has caused so may record shops to close. But I can’t see vinyl dying out anytime soon. Those that have survived have adapted and moved with the times.