In a society where a career in music can be downloaded off the Internet, a person who knows where to buy a microphone is considered an artist and where someone who’s able to press play on tape claims to be a dj. In this world only a few stand out, amongst those chosen few is a young man from Amsterdam, The Netherlands. This is The Flexican’s society, welcome.

“The Flexican” is an interesting name. How’d you come up with it?
My friend Sef, who I work with a lot, came up with this name. I was born in Mexico, so I’m a Mexican, and my style is flexible – so The Flexican.

What contributed to your decision (on a musical and inspirational level) to become a DJ and producer?
I started DJing at 14 here in Holland. Actually, when I moved from Mexico, the only music that I was into was rock. There was no hip-hop, either. That all came when I started to go to school [in Amsterdam]. The music that the kids were playing was so diverse. I started listening to hip-hop, Caribbean music, Surinamese music, music from the islands. [Ultimately] I watched MTV’s The Grind, and I said, “I want to do that.” It was that Fat Beats kind of thing, scratching and turntablism [too]. But before all of that, I definitely liked rock. 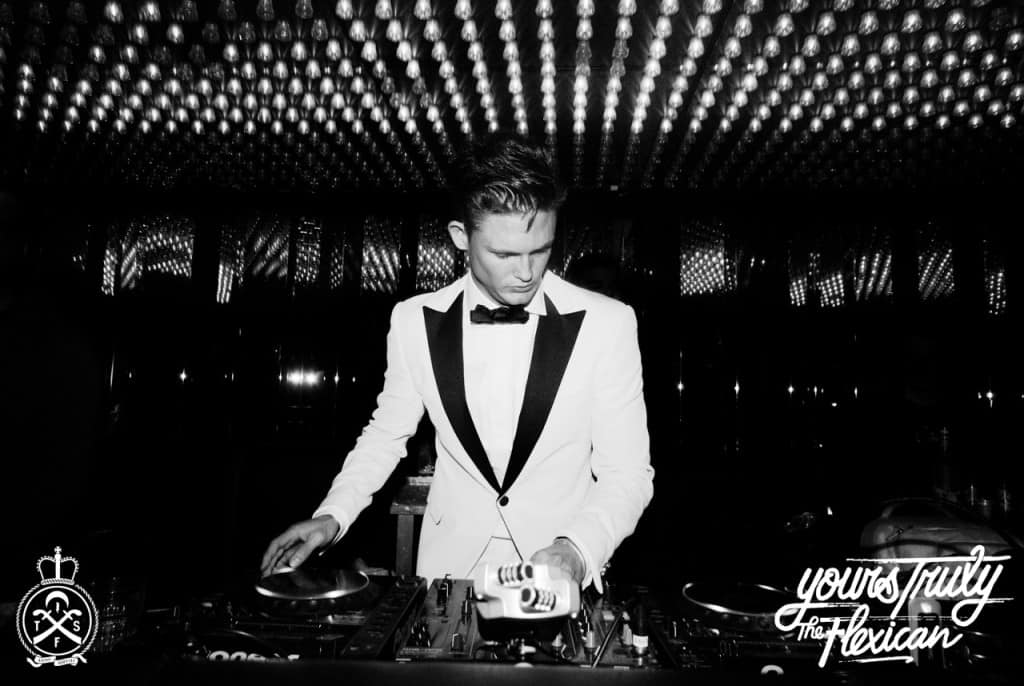 Where you a DJ or a producer first?
I was a DJ

Who were you into as a rock fan?
I was a really big Pink Floyd fan. I was like, eight or something, and my parents were like, “hey, you really like Pink Floyd, this music we used to listen to when we took some acid or something,” so they thought it was funny. An older friend of my parents used to listen to Pink Floyd. He showed me the video and concert of “The Wall,” and I was really impressed. then I listened to Dark Side of the Moon, and I was deep, deep into it.

What do you retain in your productions and DJ style now (if anything) from your fascination with rock and Pink Floyd?
Maybe, because I was listening to so much rock, that’s why I wanted to start playing the drums. When mixing and choosing records [and production, too], the thing that’s really important are the drums. That’s what I took from the rock and roll.

Most people know you as the original producer of what became “Bumaye (Watch Out For This),” Major Lazer’s smash hit from Free The Universe. How did that track come to be?
Before that record started, I made a production for a Dutch rapper named Typhoon, using the same (Willie Colon and Ruben Blades duet “Maria Lionza”) sample. It was an underground hit, but [a few years later] (track co-producer) FS Green and I were really into the moombahton thing and we were like, “shit, let’s make some moombahton tracks that use the same stuff that we’re using to make Dutch hip-hop records, so we can play them in our sets.” “Bumaye” hit the hardest. I didn’t know if I should release it for free, or try to clear the sample. I thought maybe I could get it released at Mad Decent, too. I got in contact with Diplo, and we made it a collaboration for the Major Lazer album. The only thing that was missing were the vocals.

The first guys that he came with were Los Rakas (on the later released track “Desorden”). That was the original version. However, Diplo wanted the record more toward the Jamaican side for the album. Busy Signal had just gotten out of prison, so he arranged for him to record an acapella for the track. I had to create a vocal arrangement from this really long freestyle, one take, no adlibs. I had to chop everything to make something out of it.

“Bumaye” is arguably one of the biggest tracks in the brief (yet voluminous) history of moombahton. Your thoughts about the genre?
I heard some tracks by Munchi. “Bumaye (Watch Out For This)” was really influenced by Munchi. FS Green and I loved his stuff. Once I realized he was from Rotterdam (which is nearby Amsterdam), I found his information and called him. I said, “yo, I like your shit.” He was like, “dope.” We talked like two hours about music, then I visited him as his mother’s house and we started making some tracks that we never finished. Yeah, I was really influenced by his sound. The look and feel of how he blends genres all in one track is amazing. In a positive way, he’s an insane person. He’s not your average guy. So much talent. He’s a genius, innovating all the time. I want to help him establish as a DJ.

You have a history as a hip-hop producer as well. I wanted to get your thoughts about the trend that’s happening now (especially in the U.S.) with rap vocals on EDM tracks?
Rap vocals on EDM tracks was never really my thing. I never really liked it. You can do it well, but it hasn’t been done well, yet. I think all the records are too commercial, too much for the mainstream. It’s like a Lil Wayne record with David Guetta, or something with Busta Rhymes, and I feel like they don’t blend well. It’s possible to do, but nobody has done it.

What would you like to say to all of your fans out there?
Keep downloading my music and keep supporting me so that I can keep getting bookings outside of Holland. I also want to thank all of my fans, I really need them.