The DJ and producer duo “Turmspringer” alias Edgar Peng and Didier dlb are an established institution in Berlins’s party scene. They have not only achieved a strong link to diverse crowds in many clubs, but have also influenced and inspired a lot of the new generation of DJs in the city and and beyond. It is their color and powerful music and even more noticeably their impulsive and infectious positive energy behind the decks that has let them to become major players. Whatever kind of sound they play, if it`s Techno, House, Minimal or any other sub genre, it always has a significant quality and represents it’s own refined spirit.Becoming commercial was never their ambition but rather keeping their roots tied in the Underground. Although the duo is well travelled, having played around the world, nowhere does it taste so good as in mothers kitchen. If it is the unique industrial backyard, the unofficial open air, the loft or the after hour party, thats where their hearts and souls challenge the unexpected and they feel free to live the musical freedom.

Hi Turmspringer! We were wondering how you got your start in music?
I was always into music, as kid in my parents’ house, in the streets and school with break dance; but the major step… I made as teenager. I started playing guitar after I had to quit my football career because of a major injury. It was a good swap and the best way to wash my pain away. From then on I was into music. I studied bass, percussion and ethnomusicology in London at SOAS. 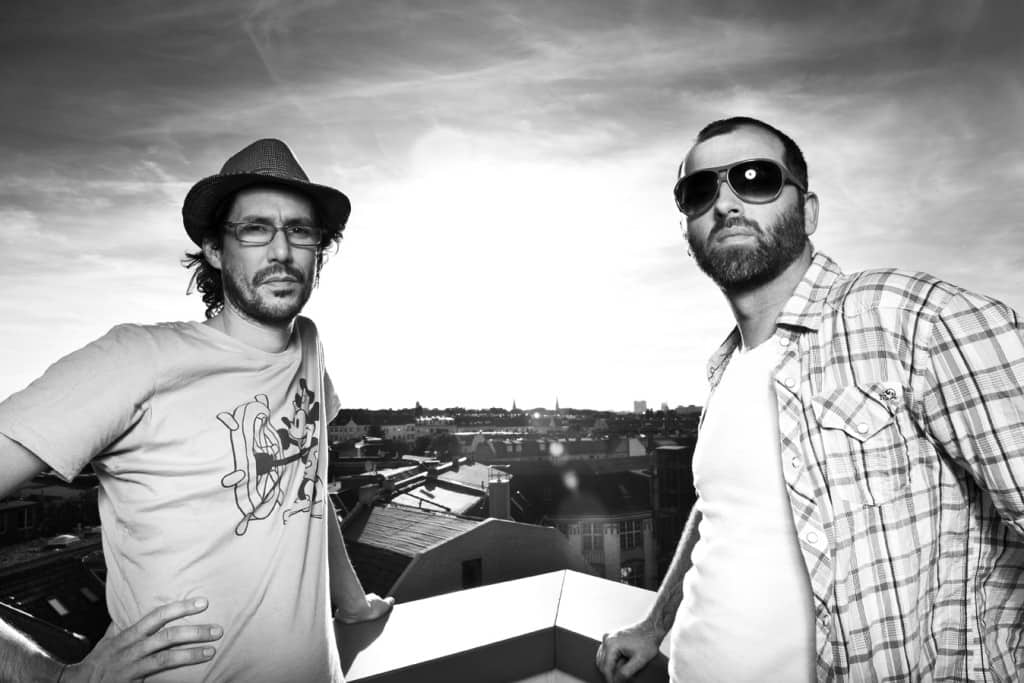 How did you meet Tim and what made you decide to make music together?
I was still living in London and was invited to play in Berlin for a typical ‘90s backyard party. There I met Tim behind the turntables – hyper and totally hot to play. Instead of fighting about the next slot, we decided to play together back-to-back. This was the first touch… with more to follow.

To someone who hasn’t heard Turmspringer before, how would you describe your music?
Ass shakin’ mind blowin’ sh*t. (Laughs)

Tell us a little bit about why you chose to go in this direction musically and what is appealing to you about the more subtle sounds.
We always have been attracted rather by unconventional music as by the popular and mainstream sound. just because it makes us feel free and inspired. Sometimes life can be very monotone and everyday life makes you stomp, so at least music or art in general should always keep the door open for new perspectives and a fresh appearance. Modern electronic club music in the present is in a constant change and keeps the fundamental impulses for the commercial music of tomorrow.

Tell us about your experience in Berlin. To what degree has Berlin influenced your sound and career ?
Berlin has influenced us a lot. When i moved from London to Berlin in 2000, i was working on my New-Jazz album for Sonar Kollektiv and it was really hard not to jump on this electrifying sound coming from the Techno underground. So i impatiently finished my RAS project to make the swap. And Tim, when i met him first time in Berlin, he was one of the best and most wanted Rare Groove and Soul&Funk DJs of Berlin…this is history too. In the last 20 years Berlin is going through a constant change in all areas and fields, it is just taking you with.

What is like working in the studio together? Do you both have disagreements sometimes?
It’s not easy, we often have disagreements, but the controversy at the end makes the flavour special. However a track ends up, it’s a symbiosis of us two.

Name us one thing that Tim does better than you?
Tim makes the better chili con carne!