Can you give us a breakdown of who you are and what you do?
I’m Alex Metric. I’m a producer, singer, remixer and DJ. I produce my own records, write songs and sing on them.Some of it is electronic-based, but it’s also got an indie rock end too. On some of the albums, I’ve collaborated with other writers such as the band called ‘INFADELS’. We are good friends, so we’ve co-written a lot of the songs together, about half of the album, and the other half I’ve done on my own. All the vocals on my tracks are mine.

How come you call yourself Metric?
I used to be called as just Metric and there’s a band from Canada called ‘Metric’.
There was a few confusing moments. One day I was in Russia doing a gig. From the song titles on their flyer, I found they took me as the Canadian band, so I changed it. It got confusing.

Why Metric? Do you like the word?
Honestly, it’s no deeper than the fact that it sounds cool. When I added Alex, it actually fit to the feel of my 80’s stuff. 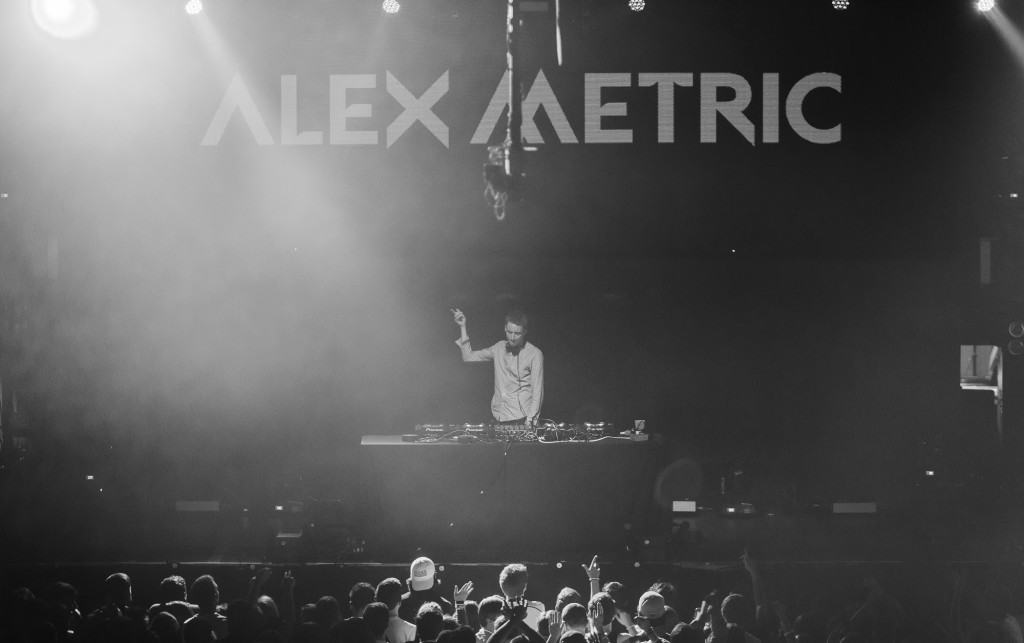 When did you start DJing? Did you teach yourself or learn from someone else?
It’s something I picked up from the friends around me I guess, I don’t remember having one clear person teaching me. We had decks or CDJs and you’d mess about together and slowly but surely get the hang of it.

What was your first DJ set up like?
Two Technics turntables and a rubbish mixer if I remember correctly!

What was your first DJ gig like?
I remember my first paid DJ gig pretty well. It was in Brixton. I forget the club, but I had planned out my whole set. I played off vinyl and even wrote down on a piece of paper how much I needed to move the pitch to get them in time. I hid the bit of paper under a turntable and kept sneaking a look during the set. It worked though. People seemed to really dig it!

When did you decide that you really wanted to DJ and produce?
Ummm I’m trying to think if there was a defining moment. I mean, I always wanted to make…, be a producer more than a DJ. The whole DJing thing almost happened almost by accident from me making records and producing. I knew I wanted to make dance music… actually I could rewind to a point where I was like 15 years old, and I’ve been listening to what’s the record? One of the last tracks on the Beatles the white album “Carry That Way” (which is one of my favorite songs). I remember talking to a friend and saying like I just felt like it could have this extra sound in it, something could happen here, and we were talking about it. I sort of made this realization that, that’s like producing a record that it’s like taking someone’s record/song and adding things to it. So from a very young age I knew I wanted to produce for bands to produce for artists. It’s probably my earliest memory, besides like singing and writing songs I knew I wanted to do something on a production basis. Then falling in love with dance music and certain pivotal records that made me really, really feel like it was something I wanted to do. Then once I started to release records people wanted me to start DJing and I started travelling the world DJing. That sort of came after I started releasing records.

Being from England who were some of your musical influences electronic or not?
So I come from more of a band or indie type background. So on that front it was more bands like Blur, Oasis, The Verve and Primal Scream. Things like that. On the dance music front it was the Big Beat scene with guys like Fat Boy Slim and Chemical Brothers. The whole French house thing that was happening at the time too. People like Daft Punk and Roule records were really big too. Some of the other big names at the time were Basement Jaxx and Underworld.

Do you see any of that influence in your music?
Yeah 100%. I think every artist is a sum of their musical parts. It’s the stuff that inspires you and the stuff you grew up loving and listening to. I think you can’t help but be inspired and spurred on by that.

You brought up an interesting point about finding a track that other DJs would play. When you’re making music, are you consciously thinking to yourself “is this something other DJs would play?”, or are you focused on what you think your fans want to hear?
My instinct is definitely not, “I want to make records for DJs” generally speaking. For the most part, I make records for me. Take “Always There”, that’s a real, emotional record that I had to get out for myself to make, but that’s not to say that once in awhile I don’t love that challenge of coming at it from a DJs perspective. It’s not just about thinking about what works in the club, I knew “Elev8”, “Creeper” would do well in a club, but rather “what is that one simple record that will really cross the board and hit a whole lot of DJs?” Take “Hope” for example, you had DJs like Dillon Francis, to Todd Edwards to Todd Terry playing it and you couldn’t get further across the musical spectrum. It’s the same for “Drum Machine”, Carl Craig said he loved the track, the Dirtybird guys have been playing it. Chris Lake and Don Diablo from the EDM side have been playing it. Whenever I do a pure club record, like “Rave Weapon” for example, I just love that challenge of making it simple as hell – but yeah, when I’m writing music I’m not focused on who’s playing it.

Final question, do you have any kind of ritual or anything you guys do before you play a live set?
Not really! Just drinks, listen to some music to pump myself up. Actually, even now as we’re into the final week of the tour I don’t even need much to psyche myself up anymore. I’m not going to be on the mic or jumping about, I’m just going up there to play records. As long as I know the music and can think about it that, I’m good!