In just a few years, Vito De Luca, the Italian-Belgian producer behind Aeroplane, has established himself as party-starting DJ. He has never been at the mercy of traditional bpms, and being free of “the dancefloor pressure” has given Vito additional license to slow things down and look around, finding the perfect blend between club music, pop hooks, and spaced-out soundscapes. Making your ass shake more than your fist pump, as his first ” In Flight Entertainment ” 100% exclusive compilation demonstrates. The start of Vito’s own label Aeropop will see many collaborations with big names and a fresh, exciting, variety of music come out, allowing Vito to flex his classically trained musical muscles in all directions, just like his touring schedule.

You learned music for 10 years, studied piano and guitar. What led you to electronic dance music and how does your background impact on your productions?
Daft Punk did. I had a rock band and I’ve discovered “Homework“ the first Daft Punk album. That’s when I put my guitar aside and bought some computers and gear. Then when I learned about sampling and that some of that french house stuff was sampling disco records, I got into that, and that’s when I was able to use my music background to actually make some disco, with guitars, and keyboards.

How does your classical training influence your productions?
There is a lot of ‘music’ in my music, which is sometimes not the case in today’s productions. I like nice chords, string arrangements and intricate harmonies. on the other hand, I often wish I knew nothing [of music theory] because it allows you to completely be free of all the rules.

You’ve been called the leader of the nu-disco genre. Would you agree with that?
Not really. When I started making music with Aeroplane there was already nu-disco there. What Aeroplane did was a different thing. It was inspired by disco. But nu-disco has this electronic twist to it and what I was trying to make back then was real disco. I really wanted to make disco like if it was 1981. I don’t know if you understand… real disco was played with a real drummer, real musicians all in the same room playing the song. You could listen to a disco song for 12 minutes that does the same thing in a loop and never get bored of it because it’s so human and alive. 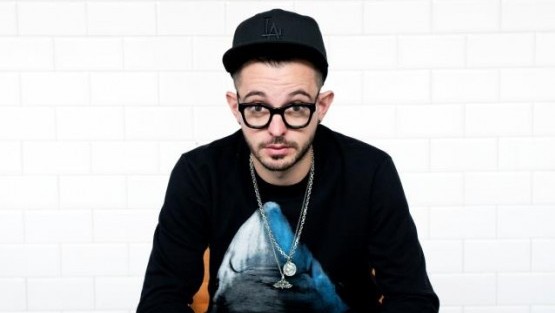 Aeroplane used to be a duo. Can you tell us what happened?
We did the album [We Can’t Fly] while we were still the two of us. But that’s actually the album that started the process of splitting up because the other guy from Aeroplane was more the DJ side of it. I was a musician on the other hand and was less into the DJ things. When we made the album, it was really a musician record. It was really about playing instruments. And that’s when the process started happening that we were like ‘okay, so maybe this record is more my record than yours now. So maybe we should do something about it’. And that’s when we had a discussion and decided to stop working together.

After you went solo, were there still people telling you what to do?
I’m not really an open-minded musician. As in, I usually know exactly what I want and anything that goes out of that – I’d never take it. I always have this flash of a song or this flash of a remix. And I know precisely which sounds and where I need them once that’s in my head.That’s more or less what happens

You make ‘spacious cosmic disco’. What’s the connection between disco and the cosmos?
It’s linked to the futuristic and electronic elements of disco. or to drugs. You prefer slow grooves to sonic booms.

You not only produce your own music, you also write its lyrics yourself. Where do you find inspiration for the lyrics?
I don’t really “write“ lyrics. I just use the old technique that certain melody notes call for a certain sound, so I sing pretty much gibberish and then try to sort out all these sounds and turn them into words that kinda have a meaning.

How would you describe Aeroplane’s music in just a few words?
The power of chords.

One of the defining features of Aeroplane’s music is always how huge the mix sounds. What’s your approach when it comes to mixing ?
Ah man, it’s funny you say that cause I consider myself the worst final mixer in the world. Still, people ask me how I get that sound, and I don’t understand why they ask. I’ve come to peace with it now, realising that mixing is slaved to production and that you can’t change what you recorded when you mix, so I focus more on producing now. Before, I would write for a long time, produce for three hours, and mix for four weeks. Now I have a better balance, so the mixing stage is less painful.

Is it true you’re scared of flying?
In the first year of Aeroplane, I wasn’t going on long-haul flights because I was terrified. Then, one day, I decided I’d had enough of missing out, so I just went for it. There isn’t much that scares me on a plane anymore.