No one expected Skrillex and Justin Bieber to cross musical paths any time soon, but the two artists now have six collaborative songs to their discographies. The two linked up for the Jack Ü hit track “Where Are Ü Now,” and recently it was revealed Skrillex contributed his production talents to five songs from Bieber’s new album Purpose, including the pop anthem “Sorry.” It could be assumed Skrillex respected Bieber’s artistry up to this point, and a recent interview NME conducted with Skrillex reveals that the two artists forged a close relationship while working on Purpose.

Skrillex told NME that originally Major Lazer was slated to help produce some of Bieber’s new songs, but the singer’s camp contacted Skrillex while he was in Los Angeles to work on some material. Bieber had been writing songs with OWSLA-associated producer Blood Diamonds, and Skrillex jumped in to help create those songs’ productions. Interestingly, their collaborative process only began two months ago, with Skrillex using free time during gigs in Asia to fine-tune the production for Bieber’s tracks. 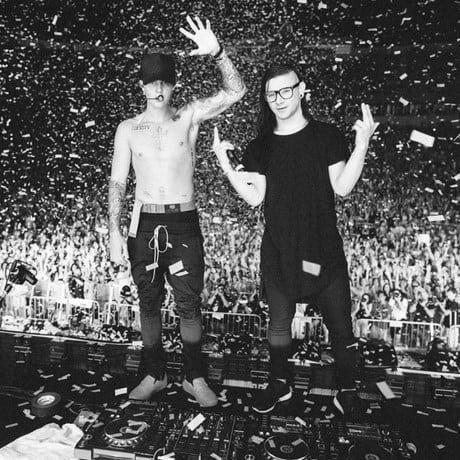 Skrillex divulged that during his time in L.A., Bieber would freestyle over the producer’s newly created beats. This lead the two to forge a close relationship, with Skrillex arguing Purpose largely represents who Bieber presently is as a person and that it marks the singer’s path to adulthood. Skrillex also admitted “Children” was his favorite track from Purpose.

While the bulk of the interview focused upon Skrillex and Bieber, the producer did open up about some ideas for new music. He said he would “like to do something rocky next” and that he has “never done something that sounds like The Doors before,” a clear callback to his The Doors collaboration “Breakn’ a Sweat.” When asked about a new album, Skrillex revealed the following:

“No, at the moment there are no plans to do an album. Even though some of the stuff I came up with was good, it wasn’t really enough for a full album. We see what happens. I’ve got some great features, but I’m keeping it a surprise unless something gets leaked. We’ll see what happens.”

When did you first meet Justin?
“On our Jack Ü collaboration with Diplo, ‘Where Are Ü Now’. I’d run into to him before, but the first time I properly met him was when we did that record.”

How did you get involved with producing five of his album tracks?
“Originally they were gonna have Major Lazer. I was in town in LA and they called me and had me lay down some music for some rough demos of songs that he and Blood Diamonds wrote. It was pretty organic.”

You’re not the most obvious collaborator. What made you want to do it?
“I guess to the outside world, it doesn’t seem obvious, but to musicians and artists, if you hear something that inspires you musically, you just want to be a part of it. I heard some well-written songs that were really good that they wanted me to do production on and from there, we wrote some new songs. It was an opportunity to try some stuff that I had never done before and we ended up making something really unique.”

What sort of things did you do that you hadn’t done before? Was it to do with production style?
“I’d never worked with someone of that profile before. That happens every time I do something new. I’d like to do something rocky next. I’ve never done something that sounds like The Doors before. I love working with different people because it forces me to do something new creatively instead repeating the same work over and over again.”

What was the first stuff that Justin played you that made you want to get involved?
“I just came into the studio with some beats that I had made and Justin just freestyled over them. It was just me and him in the room and that was it. A lot of times when pop records are made, there are a lot of politics involved, but when we did it, there was no pressure and we were able to make things from scratch. Then Justin played me some stuff that he wrote on an acoustic guitar with Blood Diamonds and I produced some of those things. That’s kind of how it happened.”

Some of the songs are very personal. Did you become close with Justin?
“Yeah, we became quite close. His album is so honest to who he is right now. He’s still a pop star making pop music, but at the same time, all the stuff I worked on with him had a sense of honesty about it. I’m not saying he wasn’t honest before, but when you listen to his lyrics, you can tell he is becoming an adult and we definitely had the relationship to discuss that.”

Justin said you called ‘Sorry’ a pure song, almost on the same level as ‘’Let It Be’’ by the Beatles.
“That was exactly what I said, verbatim. He thought I was gonna be to safe in my opinion because you can never tell what things are gonna sound like at the end of making a record. I told him that it was a very pure, honest song. It has a very refined simplicity about it.”

When did you record all your stuff with him?
“I was on the finish line with him before I went to Tokyo two weeks ago. Literally, all this shit happened so fast and for the last two months, I was working with him.’

All this has happened in the last two months?
“Yeah, it was a top priority for me. Even while I was gigging in Japan and China, I would spend my time backstage putting together rough mixes and finishing production on a lot of the songs.”

What’s your favourite song on the album?
“‘Children’ was my favourite. A lot of the production on it is quite subtle. I think he’s starting to grapple with the fact that he’s a role model for a generation. I can’t speak for him, but I think he wants to be able to spread a positive message for young people.”

You’ve been making music – are you working on an album?
“No, at the moment there are no plans to do an album. Even though some of the stuff I came up with was good, it wasn’t really enough for a full album. We see what happens. I’ve got some great features, but I’m keeping it a surprise unless something gets leaked. We’ll see what happens.”

Did you meet Kanye when he was working with Justin?
“When him and Kanye were hanging out, I was out of town. I thought that was really good for Justin to bounce some ideas off with him. I think this first record where Justin felt part of a bigger world. Songwriting teams were giving him help all the time, but then on this new record, it sounded like he wanted to step up and do it on his own and he had of questions, and Kanye and I were two of those people that he sought advice from.

“I was really impressed by that. He was just so involved with the creative process. He was so anxious for this record to be done. He didn’t slack off and go ‘whatever’ and say ‘fuck it! I’m gonna be famous and rich and not give a shit about the record’. He spent a lot of hours perfecting vocals and mixes. I really respect him for that.”